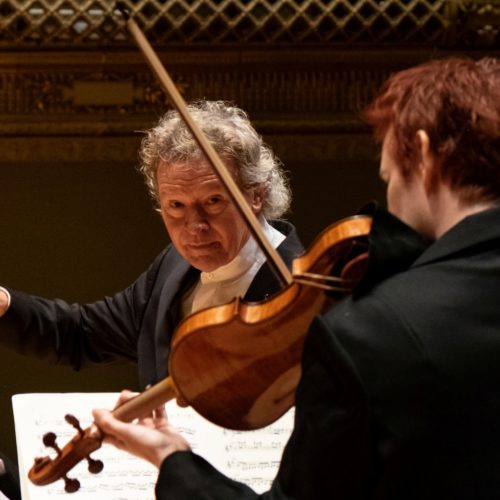 With nine major subscription concerts at Symphony Hall and the New England Conservatory’s Jordan Hall and a host of notable guest performers and conductors, the Handel and Haydn Society announces its 2019-20 season, the 205th season in its history.

Led by Artistic Director Harry Christophers, the Handel and Haydn Society brings Classical and Baroque music to life on period instruments in historically informed performances, showcasing the music the way the composer intended. Continuing its mission to present these great masterpieces as if the music were brand new, retaining its original freshness and excitement, the 2019-20 season features many of the major works of Mozart, Beethoven and Haydn, as well as Handel Messiah, A Baroque Christmas, Bach St. Matthew Passion and Vivaldi The Four Seasons.

In announcing the 2019-20 season, the Handel and Haydn Society is also announcing that Artistic Director Harry Christophers, currently in his 10th season as artistic director, will step down from his role with the organization following the 2020-21 season. An extensive international search is currently underway to find a successor.

“It has been an immense privilege to be the Artistic Director of the Handel and Haydn Society for the past ten years. The decision to hand over the baton has been a very difficult one but I feel the time is right. I am incredibly proud of what we have achieved,” said Christophers. “I am a firm believer that arts organizations need to re-invent themselves every five to ten years. This is the time for a new interpretation on the inspirational music of the baroque and classical periods, a perfect opportunity to welcome a new Artistic Director who can build on the outstanding things we have made possible over the last decade.”

Under Christopher’s direction, the Handel and Haydn Society has been transformed; Christophers has hired more than 60% of the current roster of musicians, whom he has led in twelve commercial recordings, the most of any H+H artistic director. Christophers led H+H through its 2015 Bicentennial, celebrating an unprecedented milestone for an American ensemble and has also played a significant role in increasing the awareness of H+H outside of Boston, drawing audiences in through expanded tours, with performances at Tanglewood and for the first time in more than 20 years, a return to New York City. As a result, subscriptions for the organization have risen by 70% during his tenure, the organization’s endowment has grown from $3 million to $11 million and H+H is regarded as one of the finest Baroque and Classical ensembles in the nation.

“Under Harry’s leadership, the Handel and Haydn Society has continued to grow and expand, while delivering exceptional performances that are both masterful and passionate,” said Carl Kester, chair of the Board of Directors for the Handel and Haydn Society. “Today, the orchestra and the chorus are forces to be reckoned with, offering sold-out performances time and time again. Harry leaves significant shoes to fill and as we begin the search for his successor, we will remain committed to building on his legacy.”

Christophers will end his tenure at H+H after twelve seasons, the longest since Christopher Hogwood, who first transitioned H+H to period instruments, setting the organization’s course for the 21st century.

“Christophers has led the Handel and Haydn Society to new artistic heights, bringing inspirational performances of Baroque and Classical music to audiences in the Boston area and beyond,” said David Snead, president and CEO of the Handel and Haydn Society. “Over the next two seasons, Harry will have the opportunity to program the music he prizes most highly.  Audiences will watch Harry do what he does best – lead the H+H orchestra and chorus in stirring performances of Baroque and Classical treasures. “

Following on the landmark success of “Amadeus Live” in 2017, H+H’s new season invites audiences to delve further into the music of Mozart. The season begins on October 4 and 6, 2019 at Boston’s Symphony Hall with A Mozart Celebration. Harry Christophers will conduct the H+H Orchestra and Chorus along with sopranos Joélle Harvey and Caitlin Lynch, tenor Aaron Sheehan, and bass-baritone Peter Walker in the effervescent serenade of Eine kleine Nachtmusik, along with the Mass in C Minor, K. 427, Great, Concert aria, “Nehmt meinen Dank, ihr holden Gönner!” and Concert aria, “Ah, lo previdi!”–“Ah, t’invola”– “Deh, non varcar.”

The season continues November 8 and 10, 2019 at Boston’s Symphony Hall with Mozart Jupiter Symphony. Conductor Bernard Labadie returns to lead the H+H Orchestra and cellist Guy Fishman in the longest and last symphony composed by Mozart, often regarded as one of the greatest symphonies in classical music. This performance will also feature Beethoven’s Coriolan Overture and Bach’s Cello Concerto in A Major.

For the 166th consecutive year, the Handel and Haydn Society will bring the holiday tradition Handel Messiah back to Boston with three performances at Symphony Hall on November 29 and 30 and December 1, 2019. Masaaki Suzuki will conduct the H+H Orchestra and Chorus in this holiday classic. This performance will feature soprano Elizabeth Watts, countertenor Reginald Mobley, tenor Nicholas Phan, and bass-baritone Dashon Burton.

A Baroque Christmas at the New England Conservatory’s Jordan Hall will round out the holiday season on December 19 and 22. Directed by Aisslinn Nosky, the performance will feature Debra Nagy on oboe and recorder, Emi Ferguson on flute and the H+H Orchestra. The program will include Vivaldi’s Violin Concerto RV 270, Concerto II Riposo – Per iI Santissimo Natale; Torelli’s Concerto Grosso in G minor, Op.8 No.6, Christmas Concerto; Charpentier’s Noël pour les instruments and Biber’s Mystery Sonata No. 3 in B Minor, Nativity, as well as Passacaglia in G Minor.

2020 will begin with a performance of Mozart + Haydn at Symphony Hall on January 24 and 26, 2020. Artistic Director and Conductor Harry Christophers and the H+H Orchestra and Chorus will bring alive a series of classic compositions, including Mozart’s Violin Concerto No. 4, Haydn’s Symphony No. 100, Military, and Haydn’s Lord Nelson Mass. The performance will feature Aisslinn Nosky on the violin as well as soprano Mireille Asselin, mezzo-soprano Catherine Wyn-Rogers, tenor Jeremy Budd and baritone Sumner Thompson.

On February 14 and 16, 2020, H+H will return to the New England Conservatory’s Jordan Hall for Beethoven + Mozart. Critically-acclaimed fortepianist Kristian Bezuidenhout will make his H+H directorial debut in Beethoven’s dramatic Piano Concerto No. 3 along with Mozart’s Rondo in A Major, K. 386 and his majestic Symphony No. 36, Linz. The program also will include C.P.E. Bach’s Sinfonia for Strings in C Major.

Haydn + Beethoven are featured on February 28 and March 1, 2020 at NEC’s Jordan Hall.  Jonathan Cohen will lead the H+H Orchestra in a lively performance of Haydn’s Symphony No. 6, Le Matin; and Symphony No. 92, Oxford, before bidding farewell to the 18th century with Beethoven’s iconoclastic First Symphony.

The 2019-20 season will conclude on May 1 and 3, 2020 at Symphony Hall with Vivaldi The Four Seasons, one of classical music’s most spectacular compositions. Conducted by Harry Christophers, this historically informed performance will include a dazzling solo by Aisslinn Nosky on the violin. In addition, H+H will perform Handel’s Dixit Dominus, and “Arrival of the Queen of Sheba” from Solomon.

Subscription packages are now available with great savings and may be purchased by calling 617-266-3605, visiting www.handelandhaydn.org and in person at 9 Harcourt Street in Boston (M-F 10am-6pm). Single tickets will go on sale in August 2019.