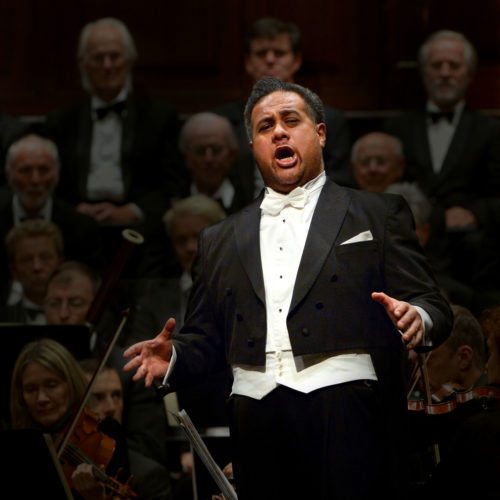 [Boston, MA – April 2018] Grammy Award winner Jonathan Lemalu, one of New Zealand’s most internationally successful opera singers, will join the Handel and Haydn Society for two performances of Handel’s Hercules on Friday, May 4, 2018 at 7:30 p.m. and Sunday, May 6, 2018 at 3:00 p.m. at Boston’s Symphony Hall.

Continuing his acclaimed cycle of Handel oratorios, artistic director Harry Christophers leads all forces in Hercules, the tempestuous tale of the mighty hero returning home from war and reconnecting with the life he left behind. Playing on the human emotions of jealousy and remorse, Hercules offers powerfully dramatic music, telling the story of the great hero Hercules returning to his wife Dejanira after a long absence and bringing with him the beautiful Princess Iole. In an attempt to secure her husband’s fidelity, she inadvertently causes his death, leading to one of the greatest mad scenes ever composed.

“Handel captured the heart of the public with his oratorios, writing in English which appealed to the middle class and showcasing the personalities of the characters such as Hercules and Dejanira,” said Harry Christophers. “The spectacular music and use of chorus is moving, dramatic and exciting, creating a bond with the audience that can’t be overstated.”

A New Zealand-born Samoan, Grammy award-winning bass baritone Jonathan Lemalu is at the forefront of today’s young generation of singers. His critically-acclaimed performances have taken him across the globe, performing on stages and festivals with the world’s top operas and symphonies. In 2009, he won a Grammy award for Best Opera Recording for his work on Billy Budd by Benjamin Britten.

“Hercules showcases the power of Handel, with some of the most dramatic pieces he composed,” said H+H President and CEO David Snead. “Harry brings out this drama and pairs it with the incredible talent and range of Jonathan Lemalu, Amanda Forsythe, and the rest of the featured performers. It is a performance not to be missed.”

About the Handel and Haydn Society
Internationally acclaimed for its performances of Baroque and Classical music, H+H’s Orchestra and Chorus delight more than 50,000 listeners each year with a 10-concert subscription series at Symphony Hall and other leading venues, in addition to a robust program of intimate events in museums, schools, and community centers. Founded in Boston in 1815, H+H is the oldest continuously-performing arts organization in the United States, and is unique among American ensembles for its longevity, capacity for reinvention, and distinguished history of premieres. Under the leadership of Artistic Director Harry Christophers, the ensemble embraces historically informed performance, bringing classical music to life with the same immediacy it had the day it was written. Through the Karen S. and George D. Levy Education Program, H+H also provides engaging, accessible, and broadly inclusive music education to more than 11,500 children each year through in-school music instruction and a Vocal Arts Program that includes six youth choruses.

In addition to its subscription series, tours, and broadcast performances, H+H reaches a worldwide audience through ambitious recordings including Mozart + Haydn (Vol. 1), Haydn (Vol. 1-3), the critically-acclaimed Haydn: The Creation, the best-selling Joy to the World: An American Christmas, and Handel Messiah, recorded live at Symphony Hall under Christophers’ direction.