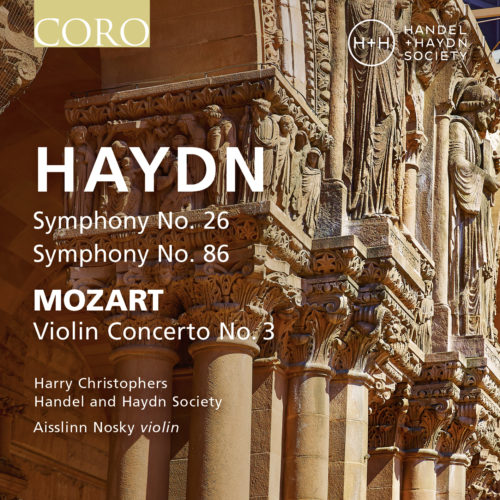 More commonly known as Lamentatione because of its association with Easter Week, Haydn’s Symphony No. 26, the early Sturm und Drang (storm and stress) symphony, incorporates an old plainsong chant of the Passion of Christ, juxtaposing it against the furious opening theme. The later Paris Symphony No. 86, with its unusual “off-tonic” exposition, shows Haydn at his most inventive and expansive. Richly scored, it tests the performer’s skill and technique to the limit. Completing the program is Mozart’s lively and vibrant Violin Concerto in G Major, performed and led by H+H’s inspirational concertmaster, Aisslinn Nosky.

“The recordings of the Haydn Symphonies allow us to showcase the Handel and Haydn Society to a wide audience, providing an opportunity for everyone to experience the beauty of this music played on authentic instruments true to the time the music was written,” said H+H President and CEO David Snead. “We are thrilled to partner with CORO to produce these recordings and make them widely available for all.”

The latest recording in the Haydn Symphonies series is currently available for sale for $16.94 at handelandhaydn.org. Earlier recordings in the series are available for $15.06,

The Haydn Symphonies Series joins a host of recordings by the Handel and Haydn Society on CORO, including Mozart Mass in C Minor, Mozart Requiem, Mozart Coronation Mass, Handel Messiah, Haydn The Creation, Joy to the World: An American Christmas, and The Old Colony Collection.

About the Handel and Haydn Society
Founded in Boston in 1815, H+H is the oldest continuously-performing arts organization in the United States, and is unique among American ensembles for its longevity, capacity for reinvention, and distinguished history of premieres. Internationally acclaimed for its performances of Baroque and Classical music, H+H’s Orchestra and Chorus delight more than 50,000 listeners each year with a 10-concert subscription series at Symphony Hall and other leading venues, in addition to a robust program of intimate events in museums, schools, and community centers. Under the leadership of Artistic Director Harry Christophers, the ensemble embraces historically informed performance, bringing classical music to life with the same immediacy it had the day it was written. Through the Karen S. and George D. Levy Education Program, H+H also provides engaging, accessible, and broadly inclusive music education to more than 11,500 children each year through in-school music instruction and a Vocal Arts Program that includes six youth choruses.

In addition to its subscription series, tours, and broadcast performances, H+H reaches a worldwide audience through ambitious recordings including Haydn (Vol. 1-3), the critically-acclaimed Haydn: The Creation, the best-selling Joy to the World: An American Christmas, and Handel Messiah, recorded live at Symphony Hall under Christophers’ direction.