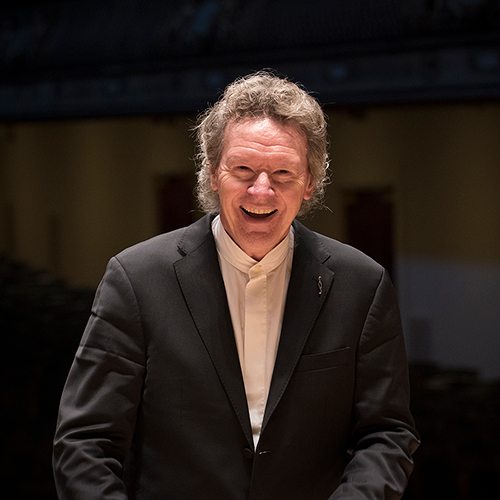 The 2019–20 Season marks Harry Christophers’s 11th year as artistic director of the Handel and Haydn Society. Since his appointment, Christophers and H+H have enjoyed an ambitious artistic journey including showcases of works premiered in the United States by H+H since 1815, broad education programming, community partnerships, concerts at the Metropolitan Museum of Art and at Tanglewood, and a series of recordings on the CORO label. Between 2015 and 2016, Christophers and H+H celebrated the organization’s Bicentennial, and he now proudly leads the ensemble in its third century of music making.

He has recorded over 120 titles for which he has won numerous awards, including the coveted Gramophone Award for Early Music and the prestigious Classical Brit Award. His CD IKON was nominated for a 2007 Grammy and his second recording of Handel’s Messiah on The Sixteen’s own label CORO won the prestigious MIDEM Classical Award. In 2009, he received one of classical music’s highest accolades, the Classic FM Gramophone Awards Artist of the Year Award, and The Sixteen won the Baroque Vocal Award for Handel Coronation Anthems, a CD that also received a 2010 Grammy Award nomination, as did Palestrina, Vol. 3 in 2014, and Monteverdi Vespers of 1610 in 2015. From 2007 he has featured with The Sixteen in the highly successful BBC television series Sacred Music, presented by actor Simon Russell Beale. The latest hour-long program, devoted to Monteverdi’s Vespers, screened in 2015.

Mr. Christophers is principal guest conductor of the Granada Symphony Orchestra and a regular guest conductor with the Academy of St. Martin in the Fields. In October 2008 he was awarded an Honorary Degree of Doctor of Music from the University of Leicester. He is an Honorary Fellow of Magdalen College, Oxford, and also of the Royal Welsh Academy for Music and Drama, and was awarded a CBE (Commander of the Order of the British Empire) in the 2012 Queen’s Birthday Honors.