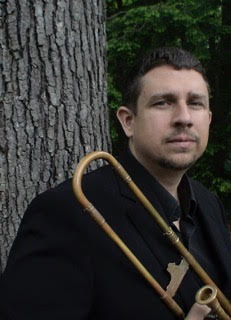 A specialist in trombones and performance from the renaissance to the nineteenth century, Erik Schmalz works internationally with many prestigious ensembles in addition to the Handel and Haydn Society. Among others, these include Tafelmusik, Piffaro, Ciaramella, Green Mountain Project, The Toronto Consort, Trinity Baroque Orchestra, Opera Lafayette, and Dark Horse Consort. Performing on period trombones, renaissance slide trumpet, and recorder, his versatility also led him to be cast as one of the seven instrumentalists in the Globe Theater’s productions of Richard III and Twelfth Night on Broadway. Erik received degrees in trombone performance from Oberlin Conservatory of Music where he studied with Ray Premru, and from the University of Cincinnati College-Conservatory of Music with Tony Chipurn. When not performing, he is usually maintaining and enjoying antique cars and boats, but can also be found teaching at summer workshops such as Mountain Collegium in Cullowhee, NC. He resides in Collinsville, Connecticut.