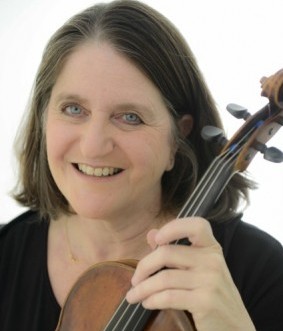 Jane Starkman, violinist and violist, performs on both baroque and modern instruments in many ensembles in the Boston area and beyond. In Boston you might see her in the Handel and Haydn Society, Boston Baroque, Aston Magna, La Donna Musicale, and many other ensembles. She has also performed with the Smithsonian Chamber Players, American Bach Soloists, Basel Sinfonieorchester, as well as many other groups. In addition to her extensive performing activities, Ms. Starkman teaches in the Historical Performance program at Boston University where she directs the Boston University Baroque Orchestra, Wellesley College, and Oberlin College’s Baroque Performance Institute. She has also been a guest clinician at the Massachusetts Suzuki Festival and the New England Conservatory of Music. Ms. Starkman received degrees from the New England Conservatory of Music and continued her studies at the Schola Cantorum Basiliensis and in New York with William Lincer.