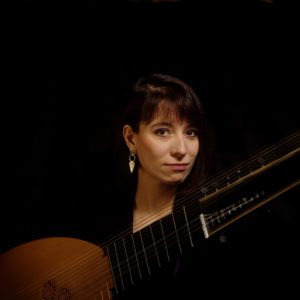 Paula Chateauneuf’s playing has been described as “one of the most exciting things on the pre-classical concert circuit.” A Fulbright Scholar to London, she established herself there as one of early music’s leading players and became the linchpin of numerous groups including the Gabrieli Consort, New London Consort, and Sinfonye. She has performed with the Academy of Ancient Music, Orchestra of the Age of Enlightenment, English Concert, His Majestys Sagbutts and Cornetts, De Nederlandse Bachvereniging, and Le Concert des Nations. One of the most sought-after accompanists in her field, Paula collaborates with leading singers and works for numerous international opera houses. She has recorded for Decca, EMI, Deutsche Grammophon, Linn, and Hyperion. She teaches at the Royal Northern College of Music and was a Creative Arts Fellow at the University of Birmingham. 2009 saw the establishment of her highly-acclaimed 17th-century-style improvising ensemble, The Division Lobby.