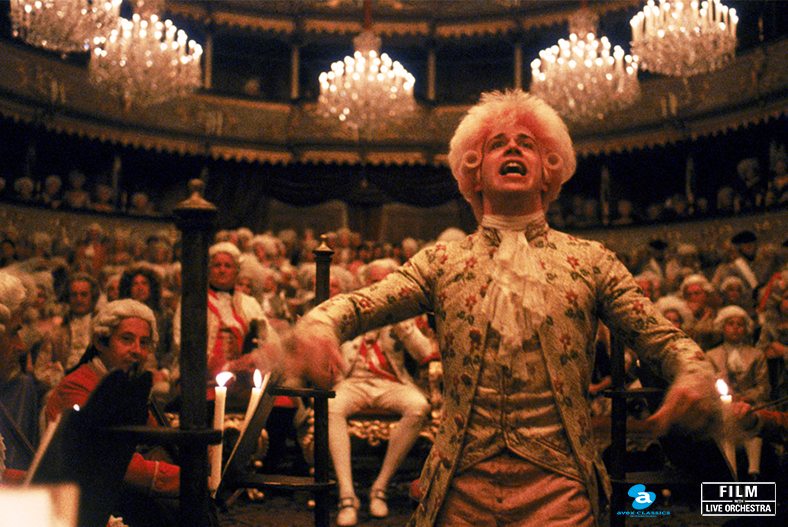 We are excited to share with you our upcoming performances of Amadeus Live, on November 10, 11, and 12 at Symphony Hall. As with so many legendary historical figures, the life of Mozart has generated a wealth of legacies and myths. Here are some of our favorites – what do you think: fact or fiction?

1. Was Mozart’s name Amadeus? Mostly True.
Mozart is now best known as Wolfgang Amadeus, but as a baby he was actually baptized Joannes Chrysostomus Wolfgangus Theophilus Mozart. The first two names record the feast day of his birth (after St. John Chrysostom), Wolfgangus was the name of his maternal grandfather, and Theophilus means “lover of God” in Greek. Now, Mozart was a cosmopolitan guy, and freely translated his name into different languages. Amadeus is the Latin equivalent to Theophilus, and Mozart also used the German version Gottlieb, the Italian version Amadeo, and the French versions Amadè, Amadé, or Amade. Overall, it seems that Amadè was Mozart’s preference, so H+H generally uses “Amadè” to reflect what Mozart wanted during his life.

2. Did Mozart have a puerile sense of humor? True.
Mozart’s juvenile humor, as depicted in the film Amadeus, accurately reflects what we find in his real-life letters. Especially when writing to his father, sister, and cousin, Mozart employed colorful turns of phrase, such as “Leck mich im Arsch!” (You probably don’t need an English translation for that one.) Whether or not he also talked like this in public is a mystery lost to history.

3. Did Italian composers in Vienna thwart Mozart’s career? Mostly False.
Opera in the 18th century was dominated by Italian composers, some of whom – such as Salieri – made their careers in Vienna. Mozart was suspicious of plots against him, and his librettist and collaborator Lorenzo Da Ponte later recalled, “Mozart had always been prevented by the intrigues of his enemies from giving proof of his divine genius in Vienna.” Most historians view this as exaggeration, however. There was plenty of work for numerous composers in Vienna, and most were probably too focused on their careers to seriously worry about Mozart’s.

4. Did Mozart write “Twinkle, Twinkle, Little Star?” False.
This myth doesn’t turn up in Amadeus, but it’s often said that Mozart wrote the famous lullaby. In fact, it was already a well-known folk tune by Mozart’s day, with the French title “Ah! vous dirai-je, maman.” Mozart did write a set of variations on the song, but didn’t write the original tune.

5. Did a stranger commission Mozart’s Requiem? True.
In Amadeus, a masked stranger commissions a Requiem from the dying Mozart. In fact, Mozart’s Requiem was indeed commissioned anonymously at the end of his life. We now know that the commissioner was count Franz von Walsegg, an amateur musician who wanted to pass the piece off as his own composition in memory of his wife. Mozart died before completing the piece, which was finished by his student Franz Xaver Süssmayr. (In real life, Salieri was not involved in dictating or completing the Requiem.)

6. Was Mozart broke when he died? True.
Mozart was in debt when he died in 1791, and his wife Constanze had to request a pension from the Emperor to provide for herself. But the situation was not because Mozart had been unsuccessful or unappreciated: he was simply bad with his own finances. He also had a simple funeral, but this was in keeping with Viennese custom, and wasn’t because of his debts or a lack of recognition.

7. Did Salieri poison Mozart? Probably False.
Mozart seems to have thought he was poisoned, and his wife recalled he said, “I am sure I have been poisoned. I cannot rid myself of this idea.” The rumor that Salieri poisoned Mozart was popularized by 1830 in a play by Alexander Pushkin, later turned into an opera by Rimsky-Korsakov. The idea was revived in the 1979 play Amadeus by Peter Shaffer, and the 1984 movie. Modern scholars question the poisoning hypothesis. The exact cause of Mozart’s death at 35 remains unknown, but rheumatic fever, streptococcal infection, kidney disease, syphilis, and trichinosis are some of the hypotheses. (The movie can get away with stretching the truth, since it’s framed as the recollections of Salieri as an old man—perhaps an unreliable narrator!)

8. Will Mozart make your child smarter? False.
In 1991, a French scientist introduced the idea that listening to Mozart increases intelligence, but it was refuted by later research. This is often dubbed “the Mozart effect.” We can’t vouch for raising IQs, but we do think it would be a smart move for you to buy your tickets today and join us on November 10, 11, or 12 – enjoy the complete film with soundtrack performed live by the Handel and Haydn Society Orchestra and Chorus.