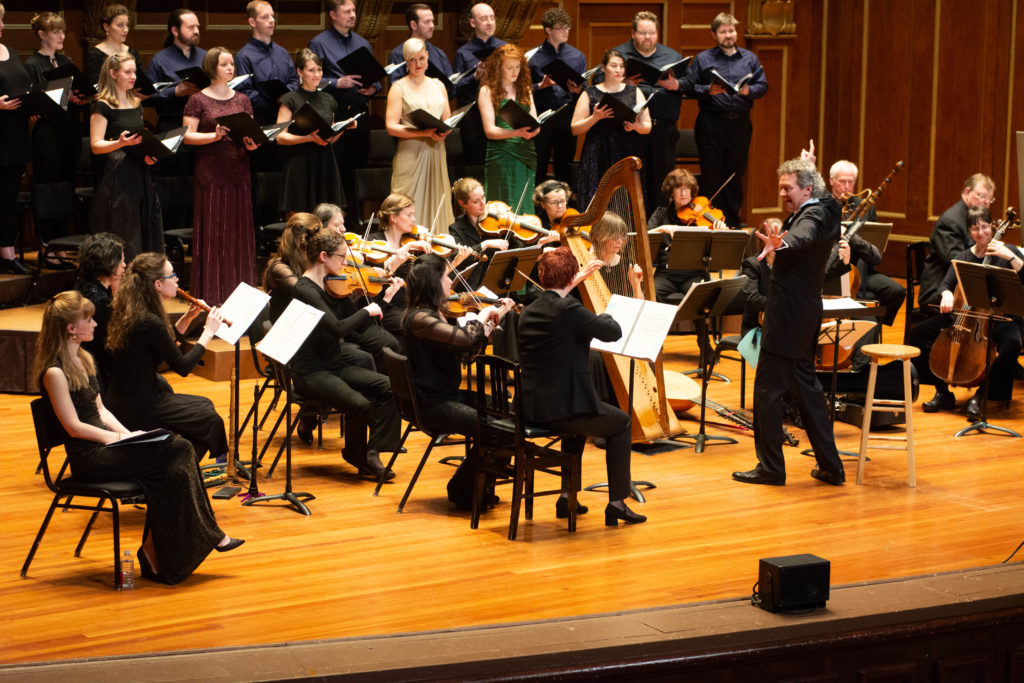 Oberon and Titania may be immortal, but Henry Purcell’s “The Fairy Queen” more readily shows its age. The 1692 masque based on Shakespeare’s “A Midsummer Night’s Dream” has both a paper-thin plot and a score that could grow tedious in the wrong hands. Luckily for the Jordan Hall audience Friday night, the Handel and Haydn Society under the baton of artistic director Harry Christophers gave the old Queen the elixir of life. The result was nothing short of magic.

The company performed this “Fairy Queen” at Tanglewood and in Rockport last year, but this marked its Boston debut. Its version includes narration by Jeremy Sams, and actress Antonia Christophers, daughter of Harry, pithily described the swans, grottos, and chariots that would have filled the stage.

The score is made up of lively country tunes, courtly dances, thrumming interludes, lyrical laments, and ornate fanfares. (So very many ornate fanfares.) Harry Christophers’s savvy direction and the small orchestra’s astute musicianship made for captivating scenes. Priscilla Herreid and Meg Owens were a dynamic wind duo, their recorders warbling and oboes ambling in harmony. Principal cellist Guy Fishman contributed muscular but gentle countermelodies. Of course, you can’t have fanfares without trumpets, and John Thiessen and Jesse Levine’s horns blazed admirably.

Nattily attired in a light suit, purple tie, and bright blue socks, bass-baritone Matthew Brook’s Drunken Poet produced beer bottles from his pockets as the orchestra tuned. Brook was a high point of last year’s “Semele,” and he brought the same powerful, expressive voice and lusty comic relief to this production. Opposite him in the first scene, sopranos Sonja DuToit Tengblad and Sarah Yanovitch played two delightful snarky, streetwise fairies.

At one point, countertenor Charles Humphries (a capable replacement for Robin Blaze) donned a petticoat and smeared lipstick on his mouth to play the rustic Mopsa, spurning Brook’s amorous Coridon in a hilarious duet…

Soloists of the Handel and Haydn Chorus filled out the rest of the songs. Soprano Margot Rood nailed every vocal cartwheel in her merry songs, DuToit and Yanovitch’s fairy duet and spiraling invocation to Hymen were outstanding as was tenor Stefan Reed’s “Autumn” air, and in soprano Sarah Brailey’s limpid spellbinding voice, not even the lyric “clap, clap, clap” could sound awkward. As usual, the chorus was patently excellent. In the grand finale, even the Christopherses were observed singing along.