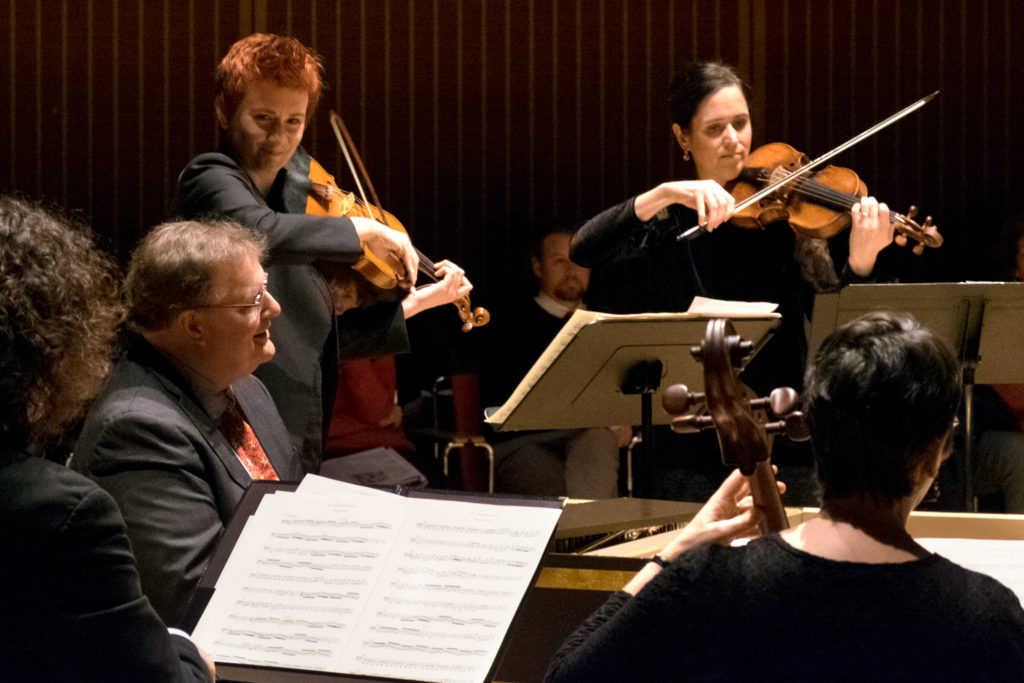 The chamber music concert Sunday at Gardner Museum’s Calderwood Hall featured eight members of Handel and Haydn Society in two major works one doesn’t generally associate with this group: Brahms’s Trio for Horn (or cello), Violin and Piano, Op. 40 (1865) and his Sextet in G Major Op. 36 for two violins, two violas and two cellos (also 1865). The Trio is generally performed today with a modern valved French horn which was invented in the early 19th century, and had become pretty much standard in Germany and Austria when Brahms was composing this work. The earlier “natural horn” requires the player stop the bell with his right hand to achieve pitches not in the “natural” harmonic series. And this results in tremendous note-to-note differences in coloration and volume. Earlier composers knew this and exploited it. Of course, what the valves in a modern horn do, is give the player the ability to have several natural horns in his grasp by engaging or disengaging different lengths of tubing. Having studied the Waldhorn (indicating a hunting horn or natural horn in Brahms’s day) with his father, Brahms evidently wanted to integrate the earlier characteristic timbres into his Trio; the first published edition calls for Waldhorn.

He loved his transitional Streicher grand piano too. With only a partial iron plate and comparatively light stringing; it sounded different from register to register, something like the early horn, but he was soon to embrace later Bechsteins and Bösendorfers that were quite developed by the 1860s.

The afternoon began with a … show-and-play on these subjects by H + H’s intrepid natural hornist, Todd Williams. … Williams handled this challenging instrument well…

This trio, one of the deepest of the most soulful of the chamber music canon, and the last chamber piece Brahms wrote for the next eight years, … Violinist Christina Day Martinson, violists Jenny Stirling and Sarah Darling, and cellists Guy Fishman and Sarah Freiberg joined Nosky for Brahms’s Sextet in G Major for Strings. .. The Sextet is the second of two Brahms composed (the other is the earlier and more popular B-flat major). Biographer Jan Swafford describes it as adapting earlier material, but “creating its own emotional world; hints of darkness, tragedy and retreat drift through the graceful surface.” Like the Horn Trio, the sextet veers between serene and memorably rambunctious. Both burst with gorgeous melodies.

The big discovery and joy in this performance was hearing Guy Fishman in the enormous first cello part. He radiated passion and stunning tone. When Christina Day Martinson ’s violin string broke in the last movement, he quickly got up and spoke to us with good humor. When you are in an ensemble with instruments having gut strings, someone should always be able to entertain the frustrated crowd. Fishman did his best to regale us with horror tales of gut strings breaking—always at the wrong time. (In the middle of the night harp strings can break with the immediacy of a gunshot). Cat gut is an urban legend. It’s simply not as good as the inner layer of sheep intestines, also used for casings for hot dogs, tennis racquets, and sutures.” Who knew? Who wasn’t amused? The time passed quickly, which was great, because while Martinson was fixing one string, a second one broke.

These pieces, so full of emotional power and breathtaking beauty, both have interesting back stories. While natural horn reminded Brahms of his father and his childhood, there is also a folksong, “Dort in den Weiden steht ein Haus,” quoted in the Adagio movement of the Horn Trio that he had learned, in childhood, from his mother. Many see this whole movement, and the Sextet, as elegies to his mother.

The two-viola variation that concludes the third movement, sounding like two distant horns, spoke with unusual eloquence. As Jan Swafford puts it so well, “With the G Major Sextet, Brahms freed himself not only from the memory of love and gnawing guilt but from the burden of his life in his art. After this there are few games with pitch-symbols in his music.” The pitches he refers to spell out Brahms’s former and last girlfriend, Agatha- AGA (T) HE in the Sextet’s first movement. “From now on,” Swafford poignantly writes, “in large degree Brahms disappears behind the work as behind a mask.”