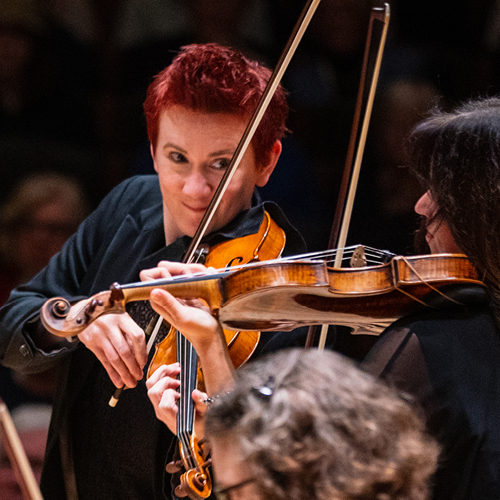 Boston, MA February 24, 2020- The Handel and Haydn Society will celebrate Artistic Director Harry Christophers’s 12th and final season with nine major subscription concerts at Symphony Hall and the New England’s Conservatory’s Jordan Hall and select other venues. The 2020-21 season, the 206th in the organization’s history, will feature a host of Christophers’s favorite compositions and a powerful line-up of major choral works featuring the Handel and Haydn Society Orchestra, Chorus and notable guest artists.

The Handel and Haydn Society brings Classical and Baroque music to life on period instruments in historically informed performances. For the 2020-21 season, Harry Christophers has selected a series of acclaimed choral and orchestral works, rarely performed in one season. The selected compositions will highlight the immense talent of the Handel and Haydn Society Orchestra and Chorus. Christophers will conduct Handel’s Messiah and Israel in Egypt; and Haydn’s The Creation, Drum Roll symphony, and Theresienmesse.

Christophers was appointed Artistic Director at H+H in 2009, the thirteenth artistic director in the organization’s history. During his tenure, the organization has been transformed. H+H has grown to be regarded as one of the finest Baroque and Classical ensembles in the nation. Christophers led the organization through its 2015 Bicentennial. He has hired more than 60% of the current roster of musicians, whom he has led in 13 commercial recordings, the most of any H+H artistic director. There has been an increase in touring, sharing the H+H magic with audiences at Tanglewood and in New York City. During his tenure, subscription sales have risen more than 70%, and philanthropic support has risen significantly, including an increase in the endowment from $3 million to $11 million.

“Since his initial appointment, Harry Christophers has been the accomplished artistic beacon of the Handel and Haydn Society. Under his leadership, we’ve expanded, taking the Orchestra and Chorus to new heights and delivering one exceptional performance after another,” said David Snead, president and CEO of the Handel and Haydn Society. “In the upcoming season, we’ll celebrate his legacy, showcasing the compositions he loves best and shining a spotlight on the H+H Chorus. It will be a monumental season, not to be missed.”

The Handel and Haydn Society’s 2020-21 season begins on September 25 and 27, 2020 at Boston’s Symphony Hall with Brahms A German Requiem. Led by conductor Harry Bicket, the performance will open with the H+H premiere of Abendfeier in Venedit, Op. 19 from Clara Schumann, a close friend of Brahms and regarded as one of the most distinguished pianists and composers of the Romantic era. This composition, for an a capella chorus, will be followed by Brahms’s Ein deutsches Requiem, featuring soprano Amanda Majeski, baritone Ryan McKinny and the H+H Orchestra and Chorus.

Honoring the many voices of Boston, director Reginald Mobley will lead the H+H Orchestra and Chorus in the 4th annual Every Voice concert in November. An uplifting concert for justice and peace, this annual free event will celebrate the 100th anniversary of the 19th Amendment, granting women the right to vote. Performances will take place on November 5 at the Union United Methodist Church, South End on November 7 at All Saints Church, Ashmont, and November 8 at First Church, Roxbury.

For the 167th consecutive year, the Handel and Haydn Society will celebrate the holiday season with three performances of Handel’s Messiah at Symphony Hall on November 27, 28, and 29, 2020. Harry Christophers will lead the H+H Orchestra and Chorus in the classic composition, for the last time as Artistic Director, featuring soprano Carolyn Sampson, countertenor Iestyn Davies, tenor James Way, and bass-baritone Henry Waddington.

Finally, to round out the holiday season, Laurence Equilbey will conduct the H+H Orchestra and Chorus in a performance of J.S. Bach’s Cantatas I, II, and III from Christmas Oratorioon on December 17 and 20, 2020 at NEC’s Jordan Hall. Trumpets, timpani and strings will be featured along with spectacular choral voices.

The new year starts off with a performance of Haydn + Mozart on January 22 and 24, 2021 at Symphony Hall. Harry Christophers will lead the H+H Orchestra in a spirited performance of Haydn’s Symphony No. 103, Drum Roll while Mozart’s Violin Concerto No. 1 will feature the unmatched Aisslinn Nosky on the violin. The H+H Chorus will join in for a performance of Haydn’s Theresienmesse, his solemn mass honoring the Empress Maria Theresia, along with soprano Mary Bevan, mezzo-soprano Catherine Wyn-Rogers, tenor Jeremy Budd, and baritone Sumner Thompson.

Beethoven takes center stage on March 5 and 7, 2021 at Symphony Hall. Václav Luks will conduct the H+H Orchestra in an exuberant performance of Beethoven’s Symphony No. 7. The performance will open with Beethoven’s Overture to The Creatures of Prometheus and the H+H premiere of Voříšek’s Symphony in D Major, Op.24.

The weekend of March 19-21, 2021 will see the Handel and Haydn Society travel from Boston to New York and back again with Harry Christophers conducting a performance of Handel’s Israel in Egypt, an epic story of the Jewish people held captive. The H+H Orchestra and Chorus will offer a powerful reminder of the abused and persecuted in today’s world. On March 19, the performance will take place at NEC’s Jordan Hall. On March 20, H+H will travel to The Temple of Dendur in the Sackler Wing at The Metropolitan Museum of Art in New York, and on March 21, H+H will return to perform at Sanders Theatre in Cambridge, MA.

The 2020-21 season will conclude on April 30 and May 2, 2021 at Symphony Hall with Haydn The Creation. In his final appearance as Artistic Director, Harry Christophers will lead the H+H Orchestra and Chorus in a spectacular performance of this exalted choral masterpiece, featuring soprano Carolyn Sampson, tenor Robert Murray, and bass-baritone Matthew Brook.

Subscription packages are now available with great savings and may be purchased by calling 617-266-3605, visiting www.handelandhaydn.org and in person at 9 Harcourt Street in Boston (M-F 10am-6pm). Single tickets will go on sale in August 2020.