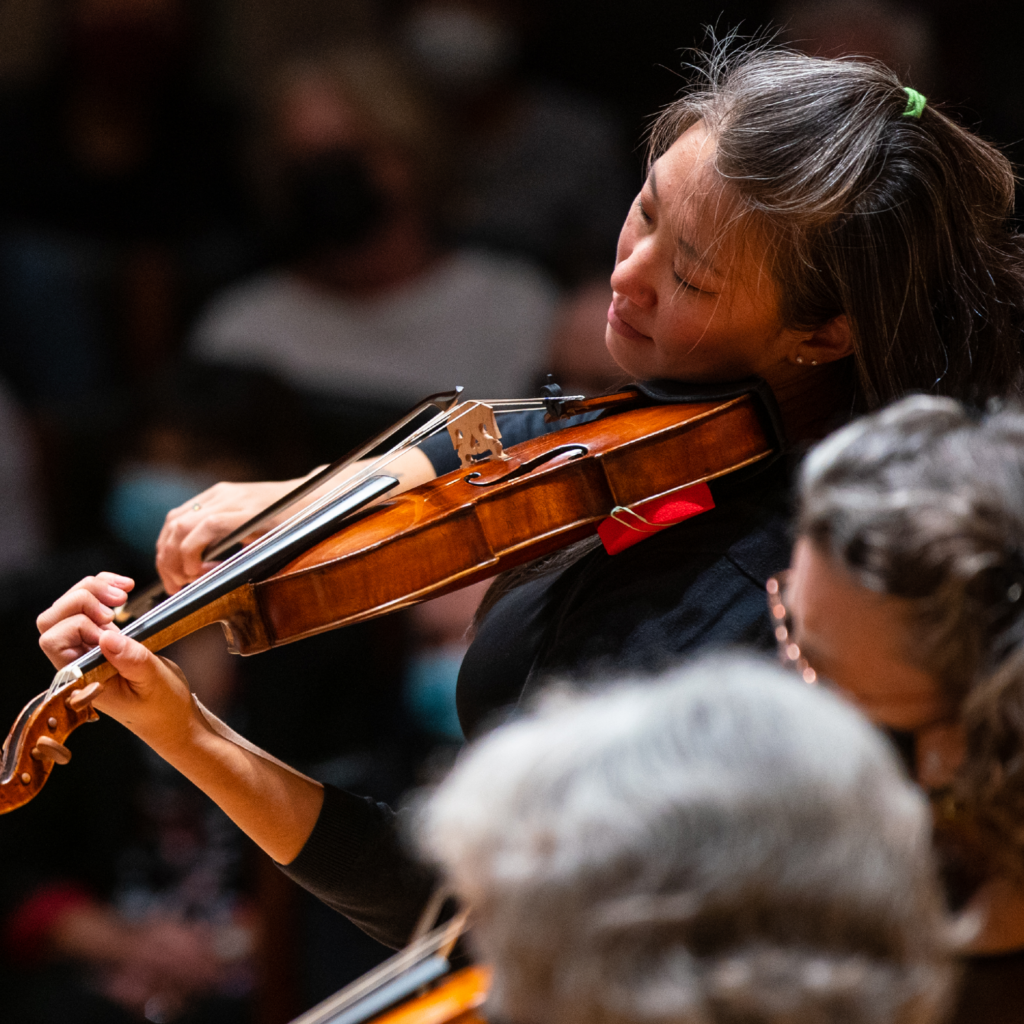 (Boston May 12, 2022) – The Handel and Haydn Society announces its 208th consecutive season, the most of any performing arts organization in the country. The 2022-23 season features masterpieces from Bach to Beethoven, plus eight H+H premieres including its first-ever complete performances of Mozart’s The Marriage of Figaro. H+H will also perform the world premiere of Crossing the Deep, an innovative concert program exploring the connections and shared themes used by classical European composers and enslaved Africans that created a new art form, the American Spiritual.

“H+H exists to inspire the intellect, touch the heart, elevate the soul, and connect us with our shared humanity through music, and next season our period instrument orchestra and chorus are restoring the luster and vibrancy of pillars of the canon, as well as introducing audiences to works new to H+H,” said H+H President and CEO David Snead.

Over the course of the season H+H’s audiences will enjoy an all-Bach program, Beethoven’s symphonies No. 1 and 3, the complete Brandenburg Concertos, and for the 169th consecutive year, H+H will kick off Boston’s holiday season with performances of Handel’s Messiah over Thanksgiving weekend. In 2023, Concertmaster Aisslinn Nosky will perform Mozart’s Violin Concerto No. 2, completing her survey of Mozart’s violin concertos. H+H will also perform the C Major Sinfonia by Marianna Martines, a pupil and friend of Haydn and Mozart who was well known in her time, but whose talents were lost to history until now.

H+H will also continue its popular H+H Plays On video platform. A select number of performances will be recorded and streamed online. H+H Plays On is available for free to all 2022-23 Season Subscribers.

H+H wipes the dust of the masterpieces of music, to create a sound every bit as fresh and contemporary as when the music was first written. Performing on the period instruments and using performance techniques the composers intended, the H+H orchestra and bring an exhilarating freshness to Baroque and Classical music.

One of the highlights of the season is a new concert that takes advantage of H+H’s expertise in both Baroque music and choral performance to explore the surprising connections between European composers and the creation of the American Spiritual. Concluding the season on June 1 and 4, 2023 at the John F. Kennedy Presidential Library and Museum, the concert is titled Crossing the Deep. Through imagery, music and spoken word, Crossing the Deep is a guided dramatic musical journey exploring the shared wealth of Old World and New World period music. These same stories, particularly those of triumph of the ordinary over the powerful, were incorporated by enslaved Africans into a uniquely American genre, the Spiritual. Co-created by H+H Resident Conductor Dr. Anthony Trecek-King and H+H Programming Consultant Reginald Mobley, the performance will weave a musical path including selections of spirituals like “My Lord What A Morning” and “In This Lan’,” alongside selections from Handel’s Chandos Anthems. This concert will be initially available to season subscribers; any remaining seats will go on sale to the general public in August.

The season begins on October 7 + 9, 2022 with an all-Bach program at Symphony Hall. Led by Bernard Labadie, principal conductor of the Orchestra of St. Luke’s and founder of the La Chapelle de Québec chorus, The Glories of Bach will feature soloist soprano Lauren Snouffer, countertenor Cody Bowers, tenor Andrew Haji, and bass Michael Sumuel. The season opener captures the sizzle that listeners first experienced in Leipzig, where Bach himself led these marvelous suites, when H+H performs on the period instruments for which Bach wrote. The H+H orchestra and chorus will perform Bach’s joyful Orchestral Suites 3 + 4, the festive motet Singet dem Herrn ein neues Lied, and the radiant Mass in G Major.

Raphaël Pichon, founder and artistic director of Pygmalion, will return to lead H+H for its first-ever complete performances of Mozart’s acclaimed opera The Marriage of Figaro on November 17 + 18, 2022 at Symphony Hall. The cast for the semi-staged performance will include soprano Ying Fang as Susanna and bass Krzysztof Baczyk as Figaro. Fang is a world-renowned award-winning talent that recently played Susanna in The Marriage of Figaro at Opéra national de Paris and the Metropolitan Opera House.

For the 169th consecutive year, H+H will celebrate the holiday season with performances of Handel’s Messiah, conducted by Václav Luks, artistic director of Prague’s Collegium 1704 at Symphony Hall on Thanksgiving weekend, November 25 + 26 + 27, 2022.

On December 15 + 18, 2022, H+H will welcome Jonathan Cohen, founder and artistic director of Arcangelo, to NEC’s Jordan Hall as he conducts A Baroque Christmas. The concerts will feature the H+H premiere of Zelenka’s Simphonie a 8 concertanti in A Minor, a trio of works by Handel including the motet Silente Venti, the heavenly Gloria for soprano and solo strings, and Concerto Grosso in F Major, Op. 3, No. 4, and cantata 51, Jauchzet Gott in allen Landen by J.S. Bach.

H+H will kick off the new year on January 6 + 8, 2023 with Beethoven + Mozart at Symphony Hall. Concertmaster Aisslinn Nosky will lead H+H, as the orchestra celebrates one of the most prolific composers of the 18th century, Marianna Martines. A pupil of Haydn, Martines was a powerhouse of the classical era and became the first woman to join the Accademia Filarmonica di Bologna. H+H will perform her Sinfonia in C Major. Beethoven + Mozart will also include Mozart’s Violin Concerto No. 2 in D Major, and Beethoven’s First Symphony.

Václav Luks will join H+H again for the favorite Beethoven symphony “Eroica” on January 20 + 22, 2023 at Symphony Hall. Inspired by the French revolution, Beethoven’s Symphony No. 3 is a wild journey through the emotional extremes. From the expansive first movement, to the powerful Funeral March and the virtuoso solos of the finale, “Eroica” is bigger and longer than any symphony that had ever been composed at that time. The performance will also include Czech composer Paul Wranitzky’s Symphony in D minor, “La Tempesta.” Highly respected by Mozart, Haydn and Beethoven, Wranitzky was a prolific composer and one of the leading conductors in Vienna in the late 18th century. “La Tempesta” chronicles a storm at sea that slowly builds until the bass drum takes over for the thunderous finale.

Aisslinn Nosky and Ian Watson will co-direct the dazzling, inventive, and inspired Complete Bach Brandenburg Concertos February 17 + 19, 2023. Bach’s treasury of instrumental music has become a tradition for H+H. The Friday night concert will be at NEC’s Jordan Hall, while the Sunday afternoon performance will be at Sanders Theatre.

The season will continue as David Stern, founder of Opera Fuoco in France, will lead H+H in Mozart + Mendelssohn. A musical expression of Mendelssohn’s devout faith celebrating the 300th anniversary of the Reformation, the entire work builds to the dramatic final movement which is based on Martin Luther’s chorale “Ein feste Burg ist unser Gott.” The concerts will also include the H+H debut of world-renowned pianist Andreas Staier, fortepiano performing Mozart’s Piano Concerto No. 17 in G Major. Staier is an expert at historically informed performances, meticulously analyzing works in both terms of structure and the historical situation in which it originated. H+H will perform Mozart + Mendelssohn on March 17 + 19, 2023 at NEC’s Jordan Hall.

H+H returns to Symphony Hall March 31 + April 2, 2023 as Rinaldo Alessandrini, founder of Italian early music ensemble Concerto Italiano, leads the orchestra and chorus in the H+H premiere of Bach Easter Oratorio. First performed in 1725, the oratorio evokes a powerful range of emotions, from laments to joy, as it follows the Easter story. The concerts will also include Antonio Bononcini’s complex Stabat Mater, a perfect pairing for Alessandrini and the season.

Subscription packages are now available with access to the best seats at great savings and may be purchased by calling 617-266-3605 or visiting www.handelandhaydn.org. Subscribers will receive the benefit of access to H+H’s digital streaming season. Single tickets will go on sale in August 2022.

Boston’s Grammy-winning Handel and Haydn Society is dedicated to performing Baroque and Classical music with a freshness, a vitality, and a creativity that inspires all ages. H+H has been captivating audiences for 208 consecutive seasons (the most of any performing arts organization in the United States). Today, H+H’s Orchestra and Chorus delight more than 50,000 listeners annually with a nine-week subscription series at Boston Symphony Hall and other leading venues. Through the Karen S. and George D. Levy Education Program, H+H supports seven youth choirs of singers in grades 2-12 and provides thousands of complimentary tickets to students and communities throughout Boston, ensuring the joy of music is accessible to all. H+H’s numerous free community concerts include an annual commemoration of the original 1863 Emancipation Proclamation concert on December 31. H+H has released 15 CDs on the Coro label and has toured nationally and internationally. In all these ways, H+H fulfills its mission to inspire the intellect, touch the heart, elevate the soul, and connect us with our shared humanity through transformative experiences with Baroque and Classical music.