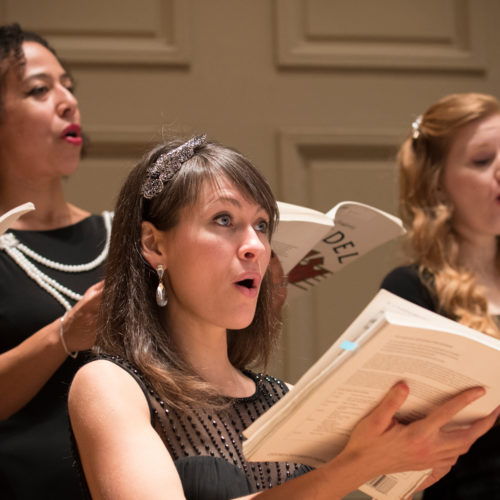 [Boston, MA – October 18, 2018] For the 165th consecutive year, the Handel and Haydn Society will bring the dazzling and inspiring Messiah to audiences in Greater Boston. Just in time for the holidays, the H+H Orchestra and Chorus will convey passion and energy to this well-loved tradition, dazzling audiences with the music performed on period instruments in the way originally intended by Handel.

“Over the years, Handel’s Messiah has become a holiday destination for families and neighbors across Greater Boston,” said David Snead, President and CEO of the Handel and Haydn Society. “In this perennial favorite, H+H delivers a dramatic performance that restores the music to its original vitality. Offering an unmatched energy that brings life to the story of Messiah, it’s destined to offer joy to all this holiday season.”

The Handel and Haydn Society brings an historical awareness to the performance of Messiah, using period instruments and replicating the approximate size of the orchestra and choral ensemble used in Handel’s time. H+H performed excerpts from Messiah during its first concert, on Christmas Day in 1815. It performed the full American premiere exactly 200 years ago, in 1818. In 1854, H+H began performing the work annually and through war and peace, good times and bad. H+H’s Messiah has been an annual tradition in Boston ever since, a record unmatched by any orchestra in the country.

The 2018 performances will be conducted by Bernard Labadie, widely regarded as one of the world’s leading conductors of the Baroque and Classical repertoire. Founder of Les Violons du Roy, he served as their Music Director for three decades. In September 2018, he began his inaugural season as Music Director of the Orchestra of St Luke’s in New York.

Soloists will include countertenor lestyn Davies, who has astounded audiences globally with his vocal agility and received rave reviews for his performance on Broadway in Farinelli and the King. Davies will be joined by soprano Lucy Crowe, a fellow at the Royal Academy of Music who has performed with opera companies throughout the world; James Gilchrist, a British tenor and esteemed Handelian who has performed in concert halls around the world; and Philippe Sly, a French-Canadian bass-baritone who has realized international renown for his vocal performances and magnetic stage presence.

2018-19 Season subscriptions are on sale now. Tickets for individual performances may be purchased by calling 617.266.3605, visiting handelandhaydn.org or in person at 9 Harcourt Street in Boston (M-F 10 a.m. – 6 p.m.). Student and group discounts are also available.