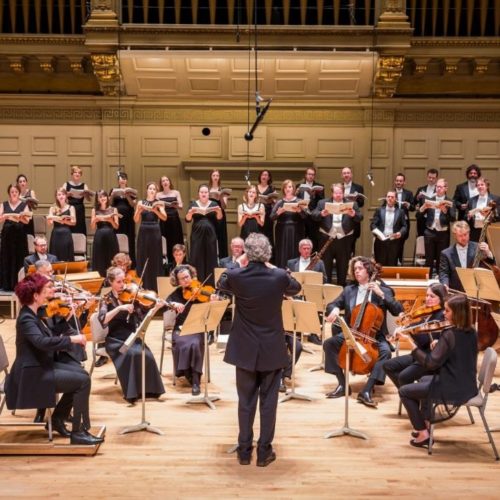 In December 2019, the Boston-based Handel and Haydn Society Chorus, celebrated for its internationally-renowned ensemble of singers, will make its New York Philharmonic debut and first Lincoln Center appearance in more than two decades as the featured voices of Handel’s immortal Messiah, led by acclaimed English conductor Harry Bicket and featuring four of the world’s most highly regarded rising soloists. Under artistic director Harry Christophers, the Handel and Haydn Society Chorus has been praised extensively for its “dynamics, counterpoint, expression…all confident and crisp” (The Boston Globe) and “internationally respected for its precision and ability to make complex polyphony speak in the most cavernous of halls” (Boston Music Intelligencer).

Recently, the Handel and Haydn Society announced that Harry Christophers, currently in his tenth season as artistic director, will step down at the end of the 2020-21 season. “It has been an immense privilege to be the Artistic Director of the Handel and Haydn Society for the past ten years. The decision to hand over the baton has been a very difficult one but I feel the time is right. I am incredibly proud of what we have achieved,” said Christophers. “I am a firm believer that arts organizations need to re-invent themselves every five to ten years. This is the time for a new interpretation on the inspirational music of the baroque and classical periods, a perfect opportunity to welcome a new Artistic Director who can build on the outstanding things we have made possible over the last decade.”

Under his leadership, the Handel and Haydn Society’s subscriptions have increased by 70%, their endowment has risen from $3 million to $11 million, and he has conducted the ensemble in twelve commercial recordings, more than any other director in the organization’s 204-year history. Christophers is responsible for hiring more than 60% of the current roster of musicians, and led H + H’s Bicentennial in 2015, an unprecedented milestone for an American ensemble.

“Christophers has led the Handel and Haydn Society to new artistic heights, bringing inspirational performances of Baroque and Classical music to audiences in the Boston area and beyond,” said David Snead, president and CEO of the Handel and Haydn Society. “Over the next two seasons, Harry will have the opportunity to program the music he prizes most highly. Audiences will watch Harry do what he does best – lead the H+H orchestra and chorus in stirring performances of Baroque and Classical treasures.“

In spring 2019, the Handel and Haydn Society, returns to New York City for two stunning concerts. These performances, housed in two of New York City’s most unique and celebrated concert venues, reflect the Handel and Haydn Society’s impeccable consideration for historically-informed concert traditions, immaculate expression of the Baroque and Classical aesthetics, and characteristic taste and precision of artistry. Under its esteemed artistic director, Harry Christophers, the ensemble brings the fiercely emotive early opera Dido and Aeneas by Henry Purcell to the spectacular Temple of Dendur setting in the Metropolitan Museum of Art’s Sackler Wing, as well as an all-Vivaldi recital including works for soprano and concertos for violin, and viola d’amore to the Morgan Library.

Click below for video of Handel and Haydn Society in the Metropolitan Museum of Art’s Temple of Dendur, performing Monteverdi’s Vespers of 1610 in spring 2017.

About the Handel and Haydn Society
The Handel and Haydn Society is internationally acclaimed for its performances of Baroque and Classical music. Based in Boston, H+H’s Orchestra and Chorus delight more than 50,000 listeners each year with a nine concert subscription series at Symphony Hall and other leading venues, in addition to a robust program of intimate events in museums, schools, and community centers. Under the leadership of Artistic Director Harry Christophers, the ensemble embraces historically informed performance, bringing classical music to life with the same immediacy it had the day it was written. Through the Karen S. and George D. Levy Education Program, H+H also provides engaging, accessible, and broadly inclusive music education to thousands of children each year. Founded in Boston in 1815, H+H is among the oldest continuously performing classical music ensembles in the United States, and is unique for its longevity, capacity for reinvention, and distinguished history of premieres. For more information, visit handelandhaydn.org

About Harry Christophers, Conductor and Artistic Director
The 2018–19 Season marks Harry Christophers’s 10th year as artistic director of the Handel and Haydn Society. Since his appointment, Christophers and H+H have enjoyed an ambitious artistic journey including showcases of works premiered in the United States by H+H since 1815, broad education programming, community partnerships, concerts at the Metropolitan Museum of Art and at Tanglewood, and a series of recordings on the CORO label. Between 2015 and 2016, Christophers and H+H celebrated the organization’s Bicentennial, and he now proudly leads the ensemble in its third century of music making.

He has recorded over 120 titles for which he has won numerous awards, including the coveted Gramophone Award for Early Music and the prestigious Classical Brit Award. His CD IKON was nominated for a 2007 Grammy and his second recording of Handel’s Messiah on The Sixteen’s own label CORO won the prestigious MIDEM Classical Award. In 2009, he received one of classical music’s highest accolades, the Classic FM Gramophone Awards Artist of the Year Award, and The Sixteen won the Baroque Vocal Award for Handel Coronation Anthems, a CD that also received a 2010 Grammy Award nomination, as did Palestrina, Vol. 3 in 2014, and Monteverdi Vespers of 1610 in 2015. From 2007 he has featured with The Sixteen in the highly successful BBC television series Sacred Music, presented by actor Simon Russell Beale. The latest hour-long program, devoted to Monteverdi’s Vespers, screened in 2015.

Mr. Christophers is principal guest conductor of the Granada Symphony Orchestra and a regular guest conductor with the Academy of St. Martin in the Fields. In October 2008 he was awarded an Honorary Degree of Doctor of Music from the University of Leicester. He is an Honorary Fellow of Magdalen College, Oxford, and also of the Royal Welsh Academy for Music and Drama, and was awarded a CBE (Commander of the Order of the British Empire) in the 2012 Queen’s Birthday Honors.

About New York Philharmonic
The New York Philharmonic plays a leading cultural role in New York City, the United States, and the world. Each season the Orchestra connects with up to 50 million music lovers through live concerts in New York and around the world, international broadcasts, recordings, and education programs. The 2018–19 season marks Jaap van Zweden’s first as the 26th Music Director of the New York Philharmonic, and ushers in an expanded connection to New York City. Maestro van Zweden leads five World Premieres — by Ashley Fure, Conrad Tao, Louis Andriessen, Julia Wolfe, and David Lang — and core symphonic masterworks; presides over Music of Conscience, New York Stories: Threads of Our City, and The Art of Andriessen; and welcomes New York’s community and service professionals to Phil the Hall. The New York Philharmonic has commissioned and / or premiered works by leading composers from every era since its founding in 1842. Highlights include Dvořák’s New World Symphony; John Adams’s Pulitzer Prize–winning On the Transmigration of Souls, dedicated to the victims of 9/11; Esa-Pekka Salonen’s Piano Concerto; Wynton Marsalis’s The Jungle (Symphony No. 4); and Anna Thorvaldsdottir’s Metacosmos. The Philharmonic introduces two new-music series in the 2018–19 season.

A resource for its community and the world, the New York Philharmonic complements its annual free citywide Concerts in the Parks, Presented by Didi and Oscar Schafer, with Philharmonic Free Fridays, its famed Young People’s Concerts, the Shanghai Orchestra Academy and Partnership, and a residency partnership with the University Musical Society of the University of Michigan. The Orchestra has appeared in 432 cities in 63 countries. The oldest American symphony orchestra and one of the oldest in the world, the Philharmonic has made more than 2,000 recordings since 1917 and produced its first-ever Facebook Live concert broadcast in 2016. Jaap van Zweden becomes Music Director in 2018–19, succeeding musical leaders including Alan Gilbert, Maazel, Masur, Zubin Mehta, Boulez, Bernstein, Toscanini, and Mahler.