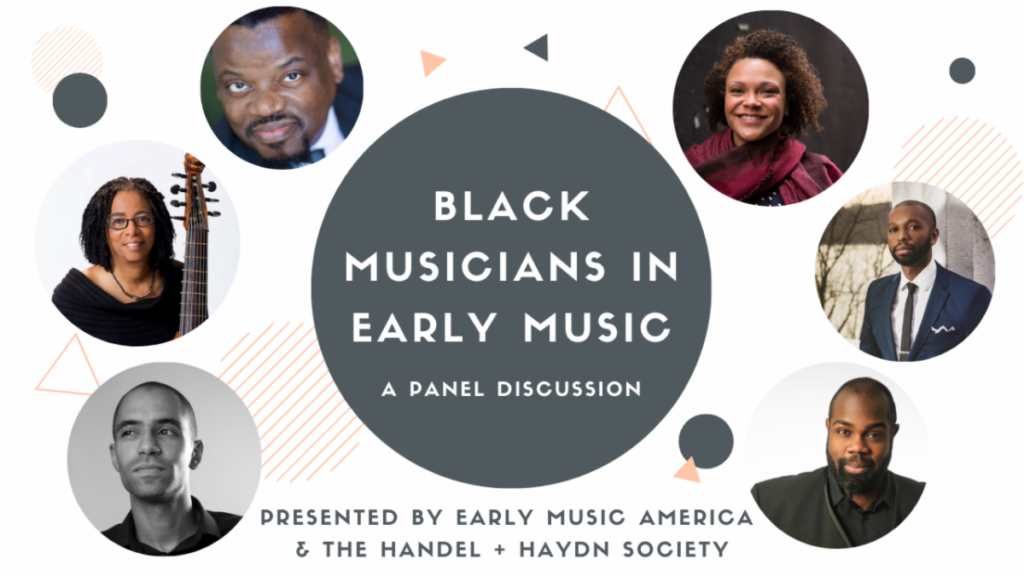 (Boston February 18, 2021) The Handel and Haydn Society (H+H) and Early Music America
(EMA) are celebrating the contribution of musicians of color with a panel discussion featuring
leading Black musicians in the field of early music. Led by moderator Dana Whiteside, Black
Musicians in Early Music will include conversations with Joseph McHardy, Reginald Mobley,
Patricia Ann Neely, Rachel Redmond, and Jonathan Woody. Whiteside will also open up the
conversation to questions from the audience watching the livestream on EMA’s
Facebook, YouTube, and Twitter accounts. The event is free and open to the public February 21, 2021 at 2:00 PM.

Joseph McHardy, harpsichord, is a Scottish musician who performs regularly with La Serenissima, the London Handel Orchestra, and the King’s Consort. Joseph is also organist of Christ Church, Chelsea.

Reginald Mobley is a world–renowned countertenor that also serves as the first-ever programming consultant for H+H. In the autumn of 2021, he will perform the role of Ottone in L’incoronazione di Poppea with the Budapest Festival Orchestra for a series of concerts in Europe and has been invited to sing Messiah with the Chicago Symphony Orchestra in December 2021. Reginald is expecting to be touring Australia in April 2022 together with Bach Akademie Australia.

Rachel Redmond is a Scottish soprano who made her début at the Opera Comique as Iris in Lully’s Atys, and performed Irene, Léontine, and Flore in Robert Carsen’s production of Les Fetes Venitiennes at the Opera Comique, The Théâtre du Capitole de Toulouse and Brooklyn Academy of Music. She subsequently made her début at the Théâtre du Châtelet as Loena in La belle Hélène. She has also performed Belinda in Dido and Aeneas (USA tour), Damon in Acis and Galatea, Caecilia in Charpentier’s Caecilia, Virgin and Martyr, Artebuse in Charpentier’s Actéon, Monteverdi Madrigals, Bach Cantatas, Grands Motets by Rameau and Mondonville, and works by Purcell and Boismortier at William Christie’s inaugural Festival at Thiré, Angel in Jephtha (European tour) and Captif in Charpentier’s David et Jonathas (Aix-en-Provence and Edinburgh International Festivals).

Jonathan Woody is an American bass-baritone who has made appearances in recent seasons with historically-informed orchestras such as Boston Early Music Festival, Tafelmusik Baroque Orchestra, Bach Collegium San Diego, Portland Baroque Orchestra, and New York Baroque Incorporated. In the 2017-18 season, Jonathan appeared with Apollo’s Fire on a national tour of Monteverdi’s L’Orfeo in the role of Caronte and participated in the Britten-Pears Young Artist Programme in Aldeburgh, UK.

Dana Whiteside is an American Baritone who has appeared as soloist in numerous oratorio and orchestral performance, including the Boston premiere of Kurt Weill’s “The Prophets” from The Eternal Road, Bach’s Saint John Passion and Mass in B Minor, as well as the Boston premiere of John Harbison’s Supper at Emaus with the Cantata Singers. In addition, he has appeared as soloist in Brahms’ Ein Deutsches Requiem, Bach’s Christ lag in Todesbanden, Handel’s Alexander’s Feast, Beethoven’s Ninth Symphony and Mass in C, Carl Orff’s Carmina Burana, Benjamin Britten’s Cantata Misericordium, as well as Stravinsky’s Pulcinella, and Bach’s Christmas Oratorio and Cantata 82 (“Ich habe genug”).

Boston’s Handel and Haydn Society is dedicated to performing Baroque and Classical music with a freshness, a vitality, and a creativity that inspires all ages. H+H has been captivating audiences for 206 consecutive seasons (the most of any performing arts organization in the United States). Today, H+H’s Orchestra and Chorus delight more than 50,000 listeners annually with a nine-week subscription series at Boston Symphony Hall and other leading venues. Through the Karen S. and George D. Levy Education Program, H+H supports seven youth choirs of singers in grades 2-12 and provides thousands of complimentary tickets to students and communities throughout Boston, ensuring the joy of music is accessible to all. H+H’s numerous free community concerts include an annual commemoration of the original 1863 Emancipation Proclamation concert on December 31. The artistic director of the Handel and Haydn Society is Harry Christophers. Under Christopher’s leadership, H+H has released 14 CDs on the Coro label and has toured nationally and internationally. In all these ways, H+H fulfills its mission to inspire the intellect, touch the heart, elevate the soul, and connect us with our shared humanity through transformative experiences with Baroque and Classical music.

Early Music America is a North American community of people who find joy, meaning, and purpose in studying and experiencing historically informed performance. For more than 30 years, EMA has enriched the field of early music in North America by developing and supporting interest in the music of the past, so that it informs and shapes our lives today. The breadth of EMA’s membership – including professional performers, students, educators, ensembles, presenters, instrument makers, amateur musicians, philanthropists, and many more – has made it an important advocate for early music throughout North America. Through its membership publications and activities, EMA supports the performance and study of early music and promotes public understanding of its potential impact on people and communities coast-to-coast.