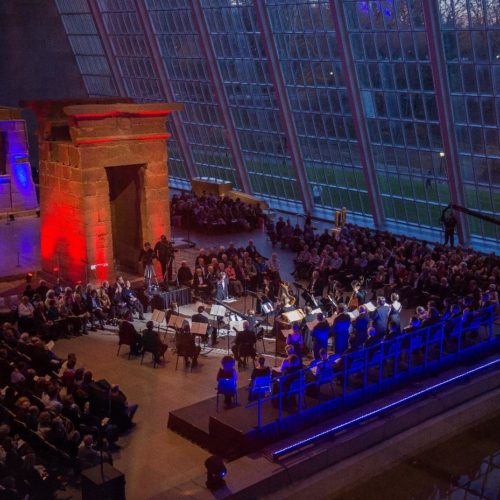 MetLiveArts Presents Handel and Haydn Society in Purcell’s Dido and Aeneas in the Temple of Dendur – March 30, 2019

New York, NY: In Spring 2019, the internationally renowned, Boston-based, early music champion, the Handel and Haydn Society, returns to New York City for two stunning concerts. These performances, housed in two of New York City’s most unique and celebrated concert venues, reflect the Handel and Haydn Society’s impeccable consideration for historically-informed concert traditions, immaculate expression of the Renaissance and Baroque philosophies, and characteristic taste and precision of artistry. Under its esteemed artistic director of a decade, Harry Christophers, the 204-year-old ensemble brings the fiercely emotive early opera Dido and Aeneas by Henry Purcell to the spectacular Temple of Dendur setting in the Metropolitan Museum of Art’s Sackler Wing, as well as an all-Vivaldi recital including works for soprano, violin, and viola d’amore at the Morgan Library.

“The Handel and Haydn Society is pleased to strengthen our artistic ties with the Metropolitan Museum of Art, whose storied artistic collections through the centuries are unsurpassed. We are also excited to make our Morgan Library debut to showcase some of our premiere soloists in luminous works of the Italian Baroque,” states David Snead, President of Handel and Haydn Society. “Each trip to New York City is both an opportunity to expand the landscape of early music on the East Coast, as well as expand our reach to new audiences as we present Baroque and Classical music, masterfully performed and passionately shared.”

In 2017, Handel and Haydn Society performed at MetLiveArts in the Temple of Dendur for a sold-out audience, presenting Monteverdi’s sacred Vespers, which was praised by Theater Scene: “Christophers and the ancient temple gave us a wonderful 1610 Vespers. It was an evening of transported experiences: in a place of ancient Mediterranean architecture relocated to a modern North American city, a seventeenth century piece of sacred music came to life in a radiant twenty-first century sound.”

The 2018–19 Season marks Harry Christophers’s 10th year as artistic director of the Handel and Haydn Society. Since his appointment, Christophers and H+H have enjoyed an ambitious artistic journey including showcases of works premiered in the United States by H+H since 1815, broad education programming, community partnerships, concerts at the Metropolitan Museum of Art and at Tanglewood, and a series of recordings on the CORO label. Between 2015 and 2016, Christophers and H+H celebrated the organization’s Bicentennial, and he now proudly leads the ensemble in its third century of music making.

He has recorded over 120 titles for which he has won numerous awards, including the coveted Gramophone Award for Early Music and the prestigious Classical Brit Award. His CD IKON was nominated for a 2007 Grammy and his second recording of Handel’s Messiah on The Sixteen’s own label CORO won the prestigious MIDEM Classical Award. In 2009, he received one of classical music’s highest accolades, the Classic FM Gramophone Awards Artist of the Year Award, and The Sixteen won the Baroque Vocal Award for Handel Coronation Anthems, a CD that also received a 2010 Grammy Award nomination, as did Palestrina, Vol. 3 in 2014, and Monteverdi Vespers of 1610 in 2015. From 2007 he has featured with The Sixteen in the highly successful BBC television series Sacred Music, presented by actor Simon Russell Beale. The latest hour-long program, devoted to Monteverdi’s Vespers, screened in 2015. Mr. Christophers is principal guest conductor of the Granada Symphony Orchestra and a regular guest conductor with the Academy of St. Martin in the Fields. In October 2008 he was awarded an Honorary Degree of Doctor of Music from the University of Leicester. He is an Honorary Fellow of Magdalen College, Oxford, and also of the Royal Welsh Academy for Music and Drama, and was awarded a CBE (Commander of the Order of the British Empire) in the 2012 Queen’s Birthday Honors.

The critically acclaimed performance series at The Metropolitan Museum of Art commissions and presents contemporary performance through the lens of the Museum’s exhibitions and gallery spaces. MetLiveArts invites artists, performers, curators, and thought-leaders to create groundbreaking new work, including live and digital performances, as well as site-specific durational performances that have been named some of the most “memorable” and “best of” performances in New York City by The New York Times, New Yorker, and Broadway World.

This program is underwritten by Louise and Thomas Cashman, Julia D. Cox, David B. Elsbree and Lorraine Gilmore, Karen Secunda Levy, Michael Scott Morton, Jeffrey S. Thomas, Judy and Menno Verhave, and Kathleen and Walter Weld. Thanks to Anne and David Gergen, season sponsors of Guy Fishman, cello. The H+H Chorus is endowed in perpetuity by Jane and Wat Tyler. The Handel and Haydn Society is funded in part by the Massachusetts Cultural Council and the National Endowment for the Arts.

About the Morgan Library & Museum

A complex of buildings in the heart of New York City, the Morgan Library & Museum began as the private library of financier Pierpont Morgan, one of the preeminent collectors and cultural benefactors in the United States. Today it is a museum, independent research library,
music venue, architectural landmark, and historic site. A century after its founding, the Morgan maintains a unique position in the cultural life of New York City and is considered one of its greatest treasures. With the 2006 reopening of its newly renovated campus, designed by
renowned architect Renzo Piano, and the 2010 refurbishment of the original library, the Morgan reaffirmed its role as an important repository for the history, art, and literature of Western civilization from 4000 B.C. to the twenty-first century.

Header Image: Handel and Haydn Society performing at the Temple of Dendur in 2017 – Photo by Stephanie Berger