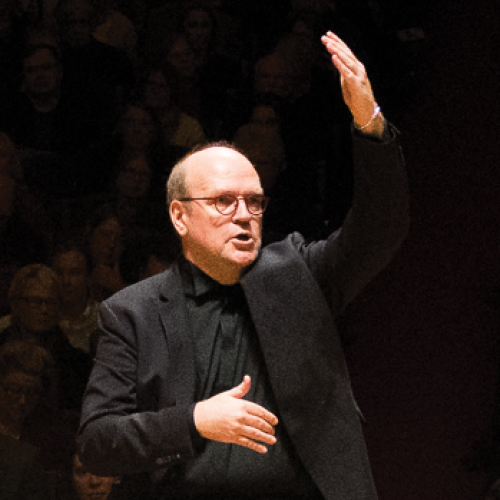 [Boston, MA – September 30, 2019] With trumpets and drums lending a fittingly regal air, the Handel and Haydn Society will bring the joy of Mozart’s Jupiter Symphony to Symphony Hall on Friday, November 8, 2019 at 7:30 p.m. and Sunday, November 10 at 3 p.m. at Symphony Hall.

Named for the king of the gods, Mozart’s Jupiter Symphony is regarded by many as among the greatest symphonies in classical music. Conductor Bernard Labadie returns to Boston to lead the Handel and Haydn Society Orchestra in this ebullient performance, which will also showcase Beethoven’s Coriolan Overture and C.P.E. Bach’s Cello Concerto in A Major, Wq. 172/H. 439.

Playing a rare cello made in Rome in 1704 by David Tecchler, H+H’s principal cellist Guy Fishman solos in Bach’s Cello Concerto in A Major, one of only three cello concertos written by C.P.E. Bach. A former Fullbright Fellow who mentored with famed Dutch cellist Anner Bylsma in Amsterdam, Fishman has performed with Dawn Upshaw, Gilbert Kalish, Eliot Fisk and many others, He has appeared at prestigious festivals such as Boulder Bach, Connecticut Early Music, Rockport and the Colorado Music Festival.

One of the preeminent conductors of the Baroque and Classical repertoire, Labadie first debuted with the Minnesota Orchestra in 1999 and has since become a regular presence on the podiums of the major North American orchestras. He founded Les Violons du Roy and La Chapelle de Québec, and regularly tours with these organizations. He has conducted orchestras around the world, from the BBC Royal Scottish National Orchestra to the Melbourne Symphony Orchestra and in 2018 he assumed the role of principal conductor of The Orchestra of St. Luke in New York.

“We are thrilled to have Bernard Labadie return to lead the H+H Orchestra in Mozart’s Jupiter Symphony, which he last conducted with H+H in 2012,” said Handel and Haydn Society President and CEO David Snead. “Labadie brings life to the performance, showcasing the beauty in this work while restoring its freshness and dramatic pulse, a hallmark of H+H’s performances. It is destined to be a brilliant evening of music.”

The Handel and Haydn Society’s 2019–20 Season Performances include:

Boston’s Handel and Haydn Society is dedicated to performing Baroque and Classical music with a freshness, a vitality, and a creativity that inspires all ages. H+H has been captivating audiences for 205 consecutive seasons (the most of any performing arts organization in the United States). Today, H+H’s Orchestra and Chorus delight more than 50,000 listeners annually with a nine-week subscription series at Boston Symphony Hall and other leading venues. Through the Karen S. and George D. Levy Education Program, H+H supports seven youth choirs of singers in grades 2-12 and provides thousands of complimentary tickets to students and communities throughout Boston, ensuring the joy of music is accessible to all. H+H’s numerous free community concerts include an annual commemoration of the original 1863 Emancipation Proclamation concert on December 31. The artistic director of the Handel and

Haydn Society is Harry Christophers. Under Christophers’s leadership, H+H has released 12 CDs on the Coro label and has toured nationally and internationally. In all these ways, H+H fulfills its mission to inspire the intellect, touch the heart, elevate the soul, and connect us with our shared humanity through transformative experiences with Baroque and Classical music.