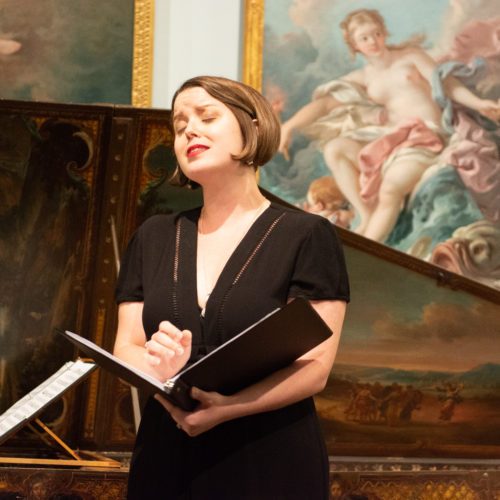 [Boston, MA – February 13, 2019] The Handel and Haydn Society, led by artistic director Harry Christophers, will bring one of the most beautiful and deeply moving masterpieces of the Baroque period to life with a performance of Henry Purcell’s Dido and Aeneas on Friday, March 29, 2019 at 7:30 p.m. and Sunday, March 31, 2019 at 3:00 p.m. at NEC’s Jordan Hall in Boston.

One of the earliest known English operas and Purcell’s only true opera, Dido and Aeneas recounts the love of Dido, Queen of Carthage, for the Trojan hero Aeneas and her despair when he abandons her. The stage production will be directed by Aidan Lang, current general director of the Seattle Opera and future leader of the Welsh National Opera. Soprano Susan Bickley, regarded as one of the most accomplished mezzo-sopranos of her generation and a recipient of the prestigious Singer Award at the Royal Philharmonic Society Awards, will perform the role of Dido, while critically-acclaimed baritone David McFerrin will take on the role of Aeneas.

The Handel and Haydn Society Orchestra and Chorus will also perform several lesser-known Purcell works to round out the program: the Chaconne in G Minor, a set of dance-like variations that sing of the artistry and emotional harmony behind its musical patterns; the lilting melody and spirited strings of A New Irish Tune in G Major; the contemplative “O solitude” performed by a single countertenor and cello; the sweet lilting tune of A New Scotch Tune in G Major; and “Welcome to all the pleasures,” which Purcell wrote in honor of the patron saint of music, St. Cecilia.

“Harry Christophers has an unmatched familiarity with the works of Henry Purcell, bringing these pieces alive in a manner that showcases their original haunting power,” said H+H President and CEO David Snead. “Christophers brings out a performance from the H+H Orchestra and Chorus that makes Baroque era music sound fresh, new, and contemporary, restoring these compositions to their original vitality, and delivering a soul-stirring experience for the concertgoer.”

This morning, the National Endowment for the Arts Acting Chairman Mary Anne Carter approved more than $27 million in grants as part of the Arts Endowment’s first major funding announcement for fiscal year 2019. Included in this announcement is an Art Works grant of $45,000 to the Handel and Haydn Society for Dido and Aeneas.

Tickets for Dido and Aeneas and individual performances in the 2018-19 Season may be purchased by calling 617.266.3605, visiting handelandhaydn.org or in person at 9 Harcourt Street in Boston (M-F 10 a.m. – 6 p.m.). Student and group discounts are also available.

The Handel and Haydn Society also will be performing Purcell Dido and Aeneas at the Metropolitan Museum of Art, in the Temple of Dendur, on Saturday, March 30, 2019. For more information, click here.

About the Handel and Haydn Society
The Handel and Haydn Society is internationally acclaimed for its performances of Baroque and Classical music. Based in Boston, H+H’s Orchestra and Chorus delight more than 50,000 listeners each year with a nine concert subscription series at Symphony Hall and other leading venues, in addition to a robust program of intimate events in museums, schools, and community centers. Under the leadership of Artistic Director Harry Christophers, the ensemble embraces historically informed performance, bringing classical music to life with the same immediacy it had the day it was written. Through the Karen S. and George D. Levy Education Program, H+H also provides engaging, accessible, and broadly inclusive music education to thousands of children each year. Founded in Boston in 1815, H+H is among the oldest continuously