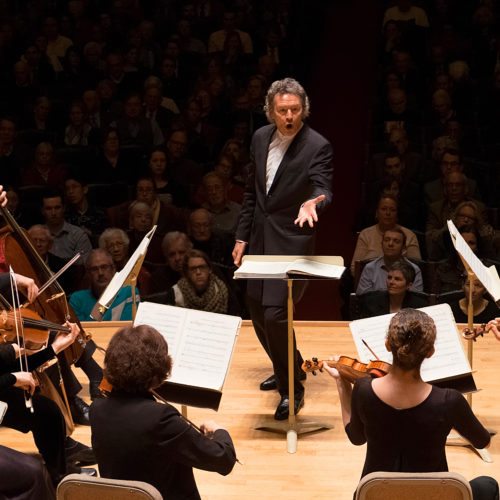 Led by Artistic Director Harry Christophers, the Handel and Haydn Society brings Classical and Baroque music to life on period instruments in historically informed performances, showcasing the music the way the composer intended.

“2018-19 is a season of firsts, while continuing to remain true to the Baroque and Classical repertoire for which the Handel and Haydn Society is known,” said Christophers. “We are looking forward to welcoming new faces to our audience, such as Lucy Crowe and Soloman Howard, while programming a number of pieces that H+H has never performed before. I’m delighted to bring these wonderful works to our audience and look forward to an amazing year.”

The concerts take place at the historic Symphony Hall and New England Conservatory’s Jordan Hall. Subscription packages are now available with great savings and may be purchased by calling 617-266-3605, visiting www.handelandhaydn.org and in person at 9 Harcourt Street in Boston (M-F 10am-6pm). Single tickets will go on sale in August 2018.

H+H’s goal is to present the great masterpieces of Baroque and Classical era composers as if the music were brand new, retaining its original freshness and excitement. Its musicians are expert in the performance practices the composers preferred, right down to the instruments they use. Woodwind instruments made entirely of wood, for example, with no metal. Brass instruments are played without modern valves. And strings are crafted of gut, not steel. The 25-50 members of the orchestra share the stage with a similar size chorus, preserving the artistic vision of history’s greatest composers.

“The purpose of our dedication to understanding the composers’ sound world is all about bringing our audiences closer to these geniuses and what they wanted to say through their music,” commented David Snead, president and CEO of the Handel and Haydn Society. “This is not an academic exercise, it’s about bringing the music alive as when it was brand new. We’re wiping the cobwebs off these great masterpieces.”

The 2018-2019 season kicks off on September 28 and September 30 at Boston’s Symphony Hall with The Great Bach Concertos and Cantatas, conducted by Harry Christophers. This is a banquet of Bach’s greatest showpieces, from the sublime tapestry of his Concerto for Two Violins in D Minor and the Cantata IV from Christmas Oratorio, to the exhilarating exuberance of the Brandenburg Concerto No. 3 and H+H’s premiere of the soaring majesty of the Mass in G Major, BWV 236. The performance will also feature the first H+H performance of Bach’s Cantata 79, Gott der Herr ist Sonn und Schild. The program will feature Aisslinn Nosky and Susanna Ogata as violin soloists along with the H+H Orchestra and Chorus.

The season continues November 9 and November 11 with Beethoven’s Emperor Concerto at Symphony Hall, in a program that also includes the first H+H performances since 1865 of Schubert’s Symphony No. 9, the “Great.” Played with H+H’s expert virtuosity, vigor, and vitality, these masterpieces will be brought to life by dynamic conductor Richard Egarr and virtuoso fortepianist Robert Levin, reuniting with H+H after the captivating performances of February 2016.

On November 30, December 1, and December 2, for the 165th consecutive year, the Handel and Haydn Society will bring the iconic masterpiece, Handel’s Messiah to life for the holiday season at Symphony Hall. Led by acclaimed Baroque conductor Bernard Labadie, the H+H Orchestra and Chorus will be joined by countertenor Iestyn Davies, tenor James Gilchrist, and will feature the H+H debuts of soprano Lucy Crowe and bass-baritone Philippe Sly.

Rounding out the 2018 holiday season is A Baroque Christmas at the New England Conservatory’s Jordan Hall on December 13 and 16. Directed by Ian Watson and featuring Amanda Forsythe, soprano and Aisslinn Nosky, violin, along with the H+H Orchestra, this performance will include an H+H premiere of Graupner’s Overture in D Major, Christmas as well as the H+H premieres of Dall’Abaco’s Sinfonia in C Major, Op. 6, No. 12 and Bach’s Cantata 51 Jauchzet Gott in allen Landen. The performance will also feature Vivaldi’s “Winter” from The Four Seasons, Corelli’s Christmas Concerto and Scarlatti’s Cantata pastorale per la nativita di nostro Signore Gesu Cristo.

2019 kicks off with Mozart + Haydn at Symphony Hall on January 25 and 27, 2019. Aisslinn Nosky will serve as director and violin soloist for the performance of Mozart’s Violin Concerto No. 5 in A Major, Turkish. Harry Christophers and the H+H Orchestra will bring out the joy of Haydn’s Symphony No. 99 while the soloists H+H Chorus, featuring soprano Mireille Asselin, mezzo-soprano Catherine Wyn-Rogers, and baritone Sumner Thompson, along with the H+H Chorus brings luster to Haydn’s Mass in B-Flat Major, Harmoniemesse.

On February 22 and 24, 2019, at the New England Conservatory’s Jordan Hall, H+H will revisit Glories of the Italian Baroque with two violin concertos by Vivaldi that showcase the mastery of director and violinist Aisslinn Nosky. Along with the H+H Orchestra, the performance will feature Corelli’s Concerto Grosso in F Major, Op. 6, No. 2, Telemann’s Viola Concerto (Karina Schmitz, viola), as well as five H+H premieres: Vivaldi’s Violin Concerto in D Minor, RV 242, Per Pisendel and Concerto for Violin, Op. 8, No. 5 La tempesta di mare; Muffat’s Concerto Grosso No. 12 in G Major, Propitia Sydera; Telemann’s Concerto for Three Violins; and Geminiani Concerto Grosso, After Corelli, Op. 5, No. 5 in G Minor.

On March 8 and 10, 2019, Conductor Matthew Halls will debut with the Handel and Haydn Society, leading Beethoven’s Symphony No. 5 at Symphony Hall. This masterpiece, played as the composer originally intended, carries a dramatic intensity as it moves from tragedy to triumph. Acclaimed clarinetist Eric Hoeprich will join the H+H Orchestra in the performance, which also includes Mozart’s Overture to The Magic Flute and the H+H premiere of Weber’s Clarinet Concerto No. 1.

Harry Christophers will lead the H+H Orchestra and Chorus in a complete performance of Purcell’s Dido and Aeneas on March 29 and 31, 2019. Dido and Aeneas is the haunting opera about the legendary Queen of Carthage, Dido, and the Trojan prince, Aeneas. With enhanced staging by Aidan Lang, the acclaimed General Director at the Seattle Opera, this performance will feature bass-baritone Matthew Brook; sopranos Sarah Yanovitch, Sonja DuToit Tengblad, Margot Rood, and Sarah Brailey; and baritone David McFerrin along with the H+H debuts of mezzo-soprano Susan Bickley and countertenor Reginald Mobley. The performance will also feature Purcell’s Chaconne in G Minor, as well as four H+H premieres: Purcell’s A new Irish tune in G Major, God is gone up (Canon a 7), A new Scotch tune in G Major and Welcome to all the pleasures.

The 2018-19 season will conclude on May 3 and 5, 2019 at Symphony Hall with Mozart’s Requiem, one of the most powerful masterpieces ever composed. Artistic Director Harry Christophers will conduct the H+H Orchestra and Chorus in a stirring performance which includes soprano Joelle Harvey and tenor Tom Randle and the H+H debuts of mezzo-soprano Sandra Piques Eddy and bass Soloman Howard. In addition, H+H will perform Mozart’s Masonic Funeral Music, Bach’s Singet dem Herrn, and the H+H premiere of Allegri’s Miserere mei, Deus.

Internationally acclaimed for its performances of Baroque and Classical music, H+H’s Orchestra and Chorus delight more than 50,000 listeners each year with a nine concert subscription series at Symphony Hall and other leading venues, in addition to a robust program of intimate events in museums, schools, and community centers. Founded in Boston in 1815, H+H is the oldest continuously-performing arts organization in the United States, and is unique among American ensembles for its longevity, capacity for reinvention, and distinguished history of premieres. Under the leadership of Artistic Director Harry Christophers, the ensemble embraces historically informed performance bringing classical music to life with the same immediacy it had the day it was written. Through the Karen S. and George D. Levy Education Program, H+H also provides engaging, accessible, and broadly inclusive music education to more than 11,500 children each year through in-school music instruction and a Vocal Arts Program that includes six youth choruses.

In addition to its subscription series, tours, and broadcast performances, H+H reaches a worldwide audience through ambitious recordings including Haydn (Vol. 1-3), Mozart + Haydn: Vol 1, the critically-acclaimed Haydn: The Creation, the best-selling Joy to the World: An American Christmas, and Handel Messiah, recorded live at Symphony Hall under Christophers’ direction.