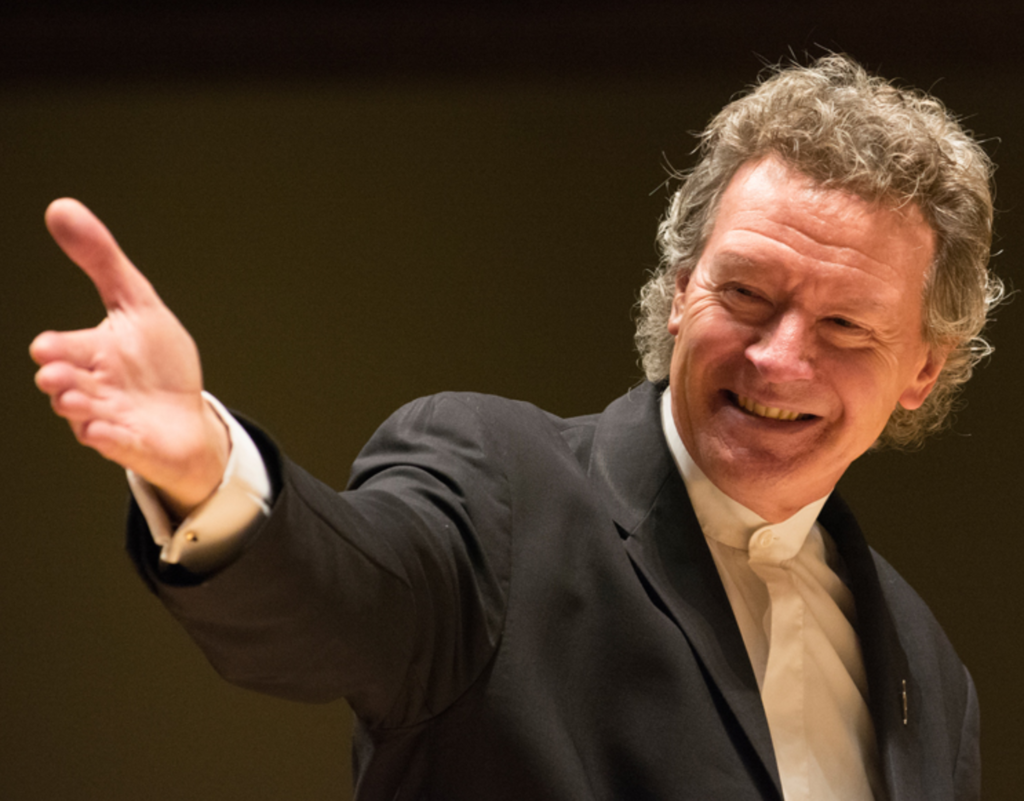 After Many Accomplishments Since 2009, Handel and Haydn Society Will Extend Artistic Director Harry Christophers’ Contract Through the 2020-2021 Season email for high resolution images, interviews, and more information.

[Boston, MA –February 10, 2017]  The Handel and Haydn Society proudly announces that it will extend Artistic Director Harry Christophers’ contract and lead the 202-year-old organization through the 2020-2021 Season. Christophers started with the Handel and Haydn Society as Artistic Director for the 2009-2010 Season, and by the end of this new contract, Christophers will have served as Artistic Director of H+H for eleven seasons, the longest of any artistic director since Christopher Hogwood. During his tenure, he has shaped H+H’s repertoire, artistically led the organization through its hallmark bicentennial celebrations in 2015, directed acclaimed H+H recordings, and more.

Under Harry Christophers’ leadership, H+H has cemented its status as one of the leading period-instrument Baroque and Classical orchestras and choruses in the United States. He led H+H on two national tours plus concerts in Washington D.C.; recorded ten CDs with H+H for the CORO label, including 2015’s acclaimed Haydn Creation, which was named one of the “Top Ten Classical Recordings of the Year” by The Chicago Tribune; hired numerous new singers and players, most notably concertmaster Aisslinn Nosky, formerly of Tafelmusik in Toronto.  In April, Christophers will lead H+H in its return to New York City following more than a two decade absence, performing the Monteverdi Vespers at the Metropolitan Museum of Art. In August, he will lead H+H’s return to Tanglewood following a similar absence, leading Purcell’s The Fairy Queen at Ozawa Hall.

Further, Christophers has rekindled interest in H+H’s namesakes, Joseph Haydn and George F. Handel.  He is currently leading the H+H orchestra in an acclaimed series of recordings of Haydn’s symphonies, and has made his annual presentation of Handel oratorios one of the highlights of the Boston cultural season. Over the past few years he has brought Handel’s Jephtha, Samson, and Saul to H+H audiences, and now prepares to lead Semele in May. His annual performances of Messiah with H+H are among the most popular events of the Boston holiday season, garnering widespread anticipation and acclaim.

Of his work with H+H, Christophers shares “one of the things I strive for in performance of both instrumentalists and singers is that they release their personality to the audience.” Boston Magazine noted “H+H is in peak shape, with an artistic director, Harry Christophers, who understands that early music should not be just ‘authentic,’ but also, you know, musical.” Further, Boston Classical Review noted of Christopher’s signature Messiah, “there may be no conductor who has a better sense for Messiah than Harry Christophers.”

“I am absolutely thrilled to continue with H+H. Together we have made so much progress over the last few years–not only through wonderful performances–but also through raising awareness of our incredible musical legacy. We have achieved so much—and yet there is so much more we can achieve and I look forward to fulfilling that dream with the help of David Snead at the wheel along with H+H’s board who have constantly been an inspirational support for me.”

“Keeping Harry as the leader of H+H’s artistic team puts us in even better position to take this extraordinary ensemble to the next level,” shares H+H CEO David Snead. “When I first heard Harry and H+H at their performance of Mozart’s Requiem last season, I was completely blown away. I had never heard or felt such passion and energy in that piece before, and I knew right away something very special was happening between Harry, the musicians, and our audience.”

Christophers’ success on the podium has led to success financially for H+H. During his tenure the organization conducted a highly successful capital campaign, raising more than $13 million for endowment, strategic initiatives, and the bicentennial celebration.  Success has come at the box office as well, with new subscriptions up this season.

“Handel and Haydn Society is quite fortunate to be led by an artist of such high standing as Harry,” shares H+H Board Chair Carl Kester. “We have shown tremendous artistic growth under his leadership and are truly excited to have Harry at our helm for the next few seasons. His special way of connecting with the musicians and the audience creates an intimate, passionate, even dramatic concert experience for everyone.”

The 2016-2017 season marks Harry Christophers’ eighth as Artistic Director of the Handel and Haydn Society. Since his appointment in 2009, Christophers and H+H have embarked on an ambitious artistic journey toward the organization’s 200th anniversary with a showcase of works premiered in the U.S. by H+H since 1815, broad education programming, community outreach activities and partnerships, and the release of a series of recordings on the CORO label. Christophers is known internationally as founder and conductor of the UK-based choir and period-instrument ensemble The Sixteen. He has directed The Sixteen throughout Europe, America, Australia, and the Far East, gaining a distinguished reputation for his work in Renaissance, Baroque, and 20th- and 21st-century music. In 2000, he instituted The Choral Pilgrimage, a tour of British cathedrals from York to Canterbury. He has recorded over 120 titles for which he has won numerous awards, including the coveted Gramophone Award for Early Music and the prestigious Classical Brit Award in 2005 for his disc Renaissance. His CD IKON was nominated for a 2007 Grammy and his second recording of Handel’s Messiah on The Sixteen’s own label CORO won the prestigious MIDEM Classical Award 2009. In 2009, he received one of classical music’s highest accolades, the Classic FM Gramophone Awards Artist of the Year Award, and The Sixteen won the Baroque Vocal Award for Handel Coronation Anthems, a recording that also received a 2010 Grammy Award nomination as did Palestrina, Vol. 3 in 2014. From 2007, he has featured with The Sixteen in the highly successful BBC television series Sacred Music, presented by actor Simon Russell Beale. The latest hour-long program, devoted to Monteverdi’s Vespers, will be screened in 2015. Harry Christophers is Principal guest conductor of the Granada Symphony Orchestra and a regular guest conductor with the Academy of St. Martin in the Fields. In October 2008, Christophers was awarded an Honorary Degree of Doctor of Music from the University of Leicester. He is an Honorary Fellow of Magdalen College, Oxford , of the Royal Welsh Academy for Music and Drama, and was awarded a CBE (Commander of the Order of the British Empire) in the 2012 Queen’s Diamond Jubilee.

David Snead joined H+H as as President and CEO in October 2015 after serving as Vice President of Marketing, Brand and Customer Experience at the New York Philharmonic a role he held since 2001. Previously, he led the marketing programs of the Pittsburgh Symphony, Guthrie Theater, Milwaukee Symphony, and Hartford Symphony. He has also served as Associate Marketing Director of the Minnesota Orchestra, General Manager of the Richmond Symphony, and Executive Director of the Eastern Connecticut Symphony. Snead is on the faculty of the League of American Orchestras’ Patron Model seminars, and is a regular lecturer at New York University and Drexel. A noted expert on the relationship between orchestras and their audiences, he has been a featured speaker at national conferences in the United States, England, France, Finland, the Netherlands, and Australia.

The Handel and Haydn Society is internationally acclaimed for its performances of Baroque and Classical music. Based in Boston, H+H’s Orchestra and Chorus delight more than 50,000 listeners each year with a nine concert subscription series at Symphony Hall and other leading venues in addition to a robust program of intimate events in museums, schools, and community centers. Under the leadership of Artistic Director Harry Christophers, the ensemble embraces historically informed performance bringing classical music to life with the same immediacy it had the day it was written. Through the Karen S. and George D. Levy Education Program, H+H also provides engaging, accessible, and broadly inclusive music education to over 10,000 children each year through in-school music instruction and a Vocal Arts Program that includes six youth choruses.

In addition to its subscription series, tours, and broadcast performances, H+H reaches a worldwide audience through ambitious recordings including Haydn Symphonies, the critically-acclaimed Haydn: The Creation, the best-selling Joy to the World: An American Christmas, and Handel Messiah, recorded live at Symphony Hall under Christophers’ direction. http://handelandhaydn.org/