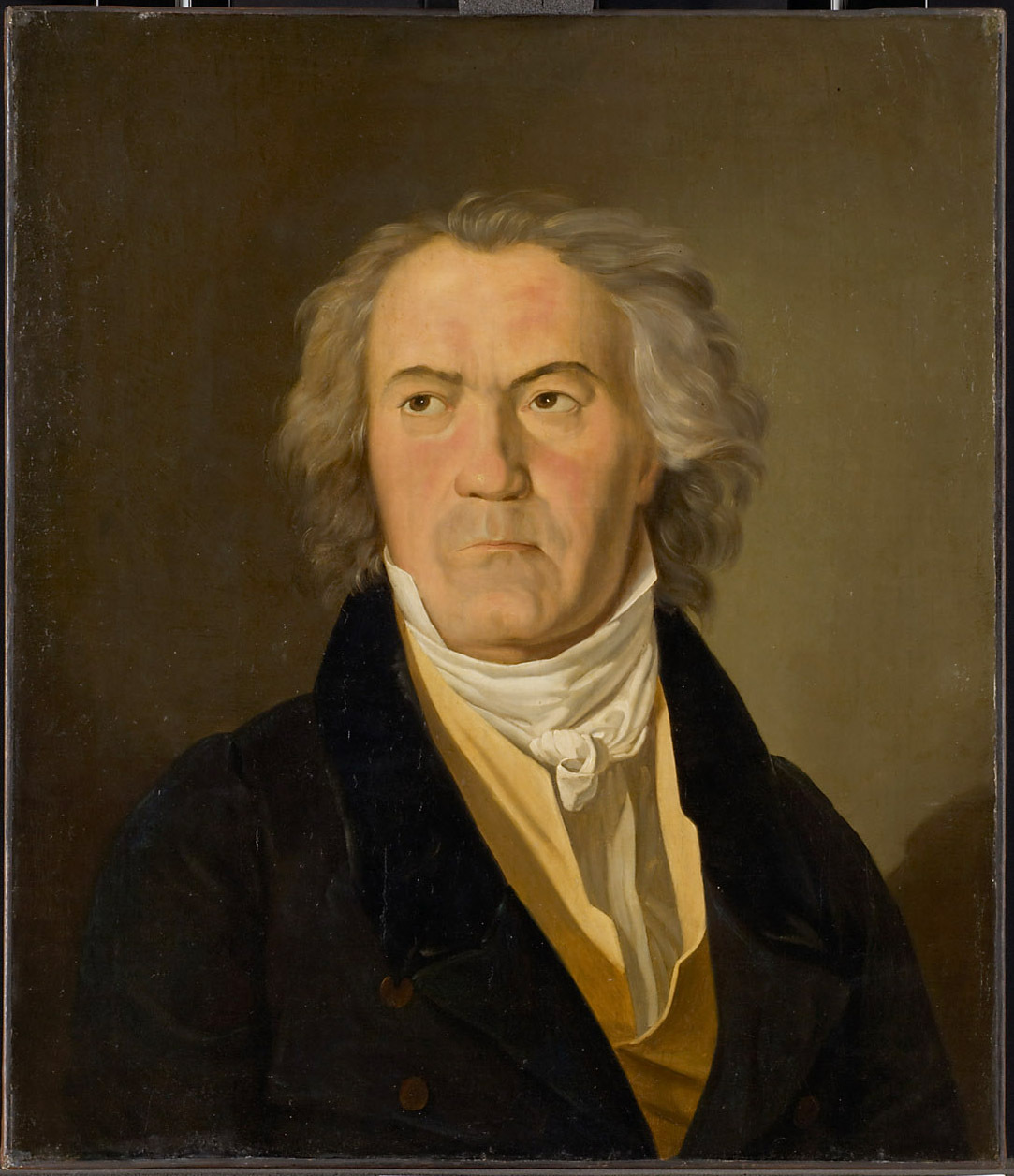 Ludwig van Beethoven (1770–1827), the eldest surviving son of the Bonn court musician Johann van Beethoven and Maria Magdalena Leym (Keverich), gave his first public keyboard concert when he was eight. His youth and talent were often compared with Mozart, a comparison encouraged by Beethoven’s father, and, in 1787, Beethoven traveled to Vienna in order to study with him. The trip was cut short when Beethoven learned that his mother was ill and he returned to Bonn. Five years later, Beethoven went back to Vienna to study with Haydn.

Beethoven’s fascination with the 1785 poem “An die Freude” by the renowned German poet Friedrich Schiller (1759–1805) began in the 1790s; the first sketches of a line of the poem date from 1798. Ten years later, Beethoven composed and premiered the Choral Fantasy, a work for piano, chorus, and orchestra. When describing the finale of the Ninth Symphony, Beethoven recalled this earlier work, but said that this latest finale was on a far grander scale. Beethoven jotted down musical ideas as they came to him and then used them as he saw fit; ideas for multiple works were often sketched on the same page. Even as he worked on his Eighth Symphony, Beethoven set the first words of Schiller’s poem and contemplated a symphony in the key of D minor. Then, between 1815 and 1818, he outlined a symphony in which the instruments would enter “one by one,” wrote a bit of music that would become the opening theme of the second movement, and sketched ideas for the other movements. At the same time, he made notes for yet another symphony.

By the early 1820s, Beethoven was ready to give his full attention to his symphony project and by 1824 his latest symphony, composed in order, was
complete. In length, the number of instruments (not including the voices), and the emotional zeniths and nadirs reached, Beethoven’s Ninth Symphony extended beyond all other symphonic works that had come before it. The movements are connected by musical material that is prepared by the opening of the first movement, replete with an introduction featuring open intervals that pull the listener into a sound world that has been amplified to unprecedented levels. The second movement is tumultuous, a continuation and complement to the first, even as its Trio section anticipates the next movement. The reach and calm of the slow movement acts as a preparation—one might even say a meditation—for the finale.

The finale cannot be easily quantified in terms of its structure because it combines elements of the previous three movements, not only by recalling and dismissing the distinctive opening of each movement, but also by borrowing an element of the previous three movements’ formal structures (the sonata form of the first movement, the scherzo elements of the second, and the variation features of the third). After rejecting the opening of the previous three movements, the “Ode to Joy” theme enters—first played in the orchestra and then sung to selected stanzas of Schiller’s poem. Once the voice enters, Beethoven crafts the finale so that voice and instrument are distinct yet intertwined. The text turns to the spiritual beginning with the words “Seid umschlungen Millionen!” (Be embraced, you millions!), at which point Beethoven introduces a new theme. One of the most ethereal moments in this movement occurs as Beethoven extends the range of voice and orchestra before combining this new theme with the “Ode to Joy” theme.

In 1823, while working on the Ninth Symphony, Beethoven was offered a commission from the Handel and Haydn Society. Although he wrote about how pleased he was to know that his fame had reached across the ocean, he did not accept. That same year he did accept a commission for a set of string quartets from Prince Nicolas Galitzin and, after fulfilling that request, continued writing in that genre.

The premiere of Beethoven’s Ninth Symphony took place on May 7, 1824, along with The Consecration of the House, an overture, and three movements from the Missa solemnis. Beethoven led this concert, but there was another conductor as well, because with Beethoven’s hearing loss, his conducting sometimes became out of sync with the orchestra. The warm reception of his latest symphony was not heard by the composer until someone turned him to face the audience’s enthusiastic applause.