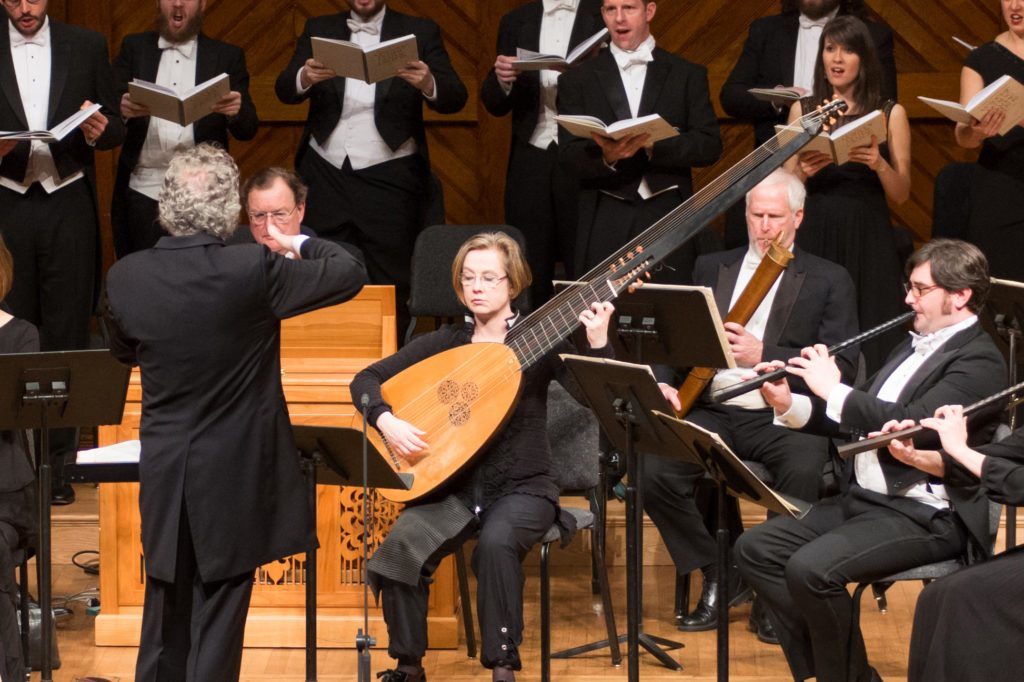 H+H uses period instruments to create an historically-informed presentation of Baroque and Classical music—as close as possible to the composer’s original intent. Interestingly, not all the instruments are available as working antiques. Sometimes we make new instruments to function and sound like the originals.

The theorbo is one of the most visually distinctive instruments in H+H’s orchestra, turning up most frequently in Renaissance and Baroque repertoire. It’s a kind of lute with a very long neck that often sticks up into the air. Paula Chateauneuf explains why it looks the way it does.

“The invention of the theorbo has to do with string technology around 1600. As strings go down and get lower and lower, they either have to get thicker and thicker, or get longer and longer. And after awhile, if it’s a short string length but very low, they’re so thick they sound really terrible.

“They actually had a way to make bass strings where they impregnated the gut with metal, but we don’t quite know how they did it, because string makers were part of guilds and didn’t give away their trade secrets. But only to a certain length would that work, so to get a better bass sound and to have the instrument be louder, they attached a second neck which accommodates bass strings which are about twice as long and thin. And they sound really great.

“Then when they invented overwound strings around 1680, there was a big change in shapes and sizes of instruments as they became smaller and shorter again. But they kept the theorbo design because they liked the sound of a six-foot bass string.

“For the most part, my instruments are reproductions. I have one oud I use for very old medieval music. It’s like the Arabic instrument, but it’s for very early troubadour music. Mine was built in 1892 by a family that was famous for building instruments in a very traditional way. But apart from that, my lutes and theorbos are all new reproductions because we have so few instruments that have survived. And they need to stay in museums and be very protected because they’re very valuable and need to be kept as evidence for research.

“In England, there must be something like ten people working quite regularly as lute-makers. Here in the States, I’m aware of maybe half a dozen. They’re kind of a rare breed, but they do tend to specialize in just making lutes and theorbos. In England, there are loads of amateur players, so there’s a relatively large market for them.