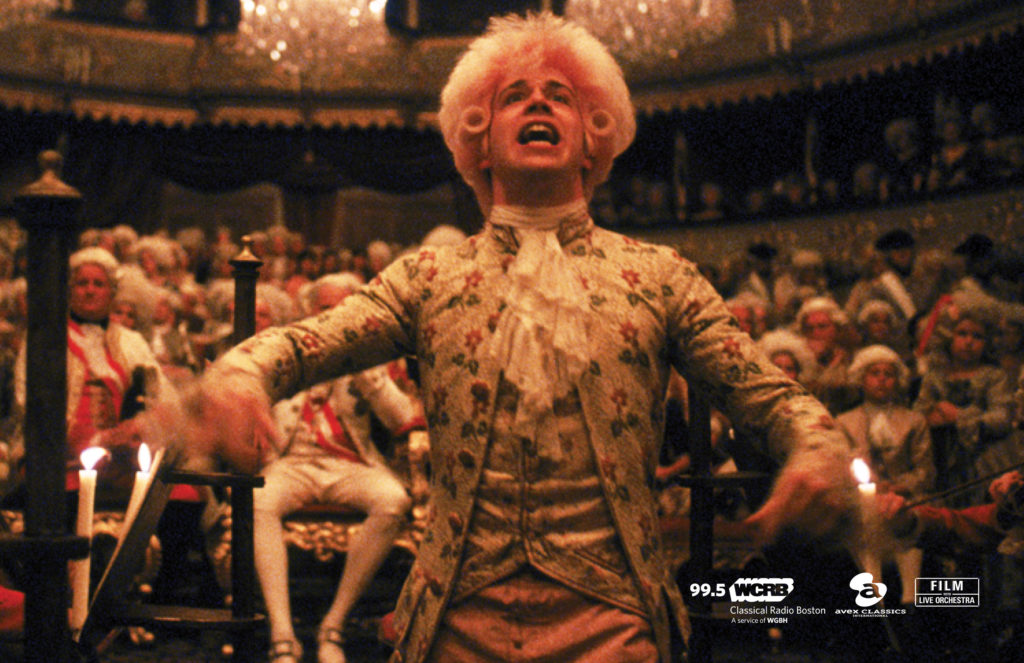 Featuring Ian Watson on Fortepiano, Who Played on the Original AMADEUS Soundtrack

[Boston, MA – October 3, 2017] The Handel and Haydn Society proudly announces the must-see event of 2017, AMADEUS LIVE, featuring the acclaimed H+H orchestra and chorus performing the soundtrack live, to the film, using authentic period instruments from Mozart’s time – the kinds of instruments Mozart himself heard and composed for. The concert will be conducted by Richard Kaufman, and features Ian Watson on fortepiano, who played on the original Amadeus film recording in 1984. Further, Handel and Haydn Society’s performance of AMADEUS LIVE is the only in the world performed by a period orchestra and chorus.

Performances will take place on November 10 and 11 (7:30pm) and November 12 (3pm) at Symphony Hall located at 301 Massachusetts Avenue in Boston. Tickets range from $25-$119 and may be purchased by calling 617-266-3605, visiting handelandhaydn.org, or in person at 9 Harcourt Street in Boston (M-F 10am-6pm). Student and group discounts are available. Further, subscription packages to H+H’s 2017–18 Season are available.

Winner of eight Academy Awards including Best Picture, Amadeus is universally acclaimed as the best movie about classical music ever made. Audiences will enjoy this spectacular marriage of sight, sound, and epic movie-making in a thrilling new way—with the film projected on a vast HD screen as the soundtrack is performed live by the H+H orchestra and chorus. According to USA Today, Amadeus is “about as close to perfection as movies get.”

“We’re beyond thrilled for this unique opportunity to truly showcase the H+H orchestra and chorus – performing as only they do, on instruments true to the time the music was written, lending the performance authenticity and power,” said David Snead, President and CEO of the Handel and Haydn Society. “This is truly a once-in-a-lifetime experience, and we’re glad to offer it to Boston audiences this fall. And to top it off, H+H’s own fortepianist Ian Watson played on the original film soundtrack in 1984. Now, he will perform the music live, 33 years later.”

Amadeus Live is an Avex Classics International Production. The Handel and Haydn Society presents this performance in conjunction with its media partners WCRB Classical Radio Boston, a service of WGBH; The Boston Globe; and Improper Bostonian.

Richard Kaufman has devoted much of his musical life to conducting and supervising music for film and television productions, as well as performing film and classical music in concert halls and on recordings. The 2017–18 season marks his 12th season with the Chicago Symphony Orchestra concert series “CSO at the Movies” and his 27th as principal pops conductor of Pacific Symphony. He holds the permanent title of pops conductor laureate with the Dallas Symphony. Highlights of 2017–18 include debuts with the New York Philharmonic, Philadelphia Orchestra, Phoenix Symphony, and Iceland Symphony Orchestra. In 2015, Mr. Kaufman made his conducting debut with the Boston Pops Orchestra, substituting for John Williams at the Annual Pops Film Night, and Mr. Williams invited him to share the podium at the annual Tanglewood Film Night in 2016. That same year, he conducted the San Diego Symphony in a live performance of Michael Giacchino’s score for Star Trek Beyond, accompanying the film in its gala world premiere. Mr. Kaufman often leads performances of complete film scores in concert, synchronizing the music to the actual film as it is shown on the screen above the orchestra. These legendary film titles include Singin’ in the Rain, The Wizard of Oz, Casablanca, Raiders of the Lost Ark, Amadeus, and Star Trek.

Multi-talented Ian Watson has been described by The Times in London as a “world-class soloist,” a performer of “virtuosic panache” and by the Frankfurter Allgemeine Zeitung as “a conductor of formidable ability.” He is Artistic Director of Arcadia Players Period-Instrument Orchestra, Music Director of the Connecticut Early Music Festival, and Associate Conductor of the Handel and Haydn Society. Ian won a scholarship at age 14 to the Junior School of the Royal Academy of Music in London, later winning all the prizes for organ performance. He completed his studies with Flor Peeters in Belgium. Ian has appeared with most major UK orchestras and the Polish and Stuttgart Chamber Orchestras, Bremen Philharmonic, Rhein-Main Symphony, Colorado Symphony, Komische Oper Berlin, and Darmstadt State Opera among numerous others. He is featured on many film soundtracks including Amadeus, Polanski’s Death and the Maiden, Restoration, Cry the Beloved Country, Voices from A Locked Room, and the BBC‘s production of David Copperfield.

The 2017–18 Season marks Harry Christophers’ ninth as Artistic Director of the Handel and Haydn Society. Since his appointment in 2009, Christophers and H+H have embarked on an ambitious artistic journey toward the organization’s 200th anniversary with a showcase of works premiered in the US by H+H since 1815, broad education programming, community outreach activities and partnerships, and the release of a series of recordings on the CORO label. Christophers is known internationally as founder and conductor of the UK-based choir and period-instrument ensemble The Sixteen. He has directed The Sixteen throughout Europe, America, Australia, and the Far East, gaining a distinguished reputation for his work in Renaissance, Baroque, and 20th- and 21st-century music. In 2000, he instituted The Choral Pilgrimage, a tour of British cathedrals from York to Canterbury. He has recorded over 120 titles for which he has won numerous awards, including the coveted Gramophone Award for Early Music and the prestigious Classical Brit Award in 2005 for his disc Renaissance. His CD IKON was nominated for a 2007 Grammy and his second recording of Handel’s Messiah on The Sixteen’s own label CORO won the prestigious MIDEM Classical Award 2009. In 2009, he received one of classical music’s highest accolades, the Classic FM Gramophone Awards Artist of the Year Award, and The Sixteen won the Baroque Vocal Award for Handel Coronation Anthems, a recording that also received a 2010 Grammy Award nomination as did Palestrina, Vol. 3 in 2014. From 2007, he has featured with The Sixteen in the highly successful BBC television series Sacred Music, presented by actor Simon Russell Beale. The hour-long program, devoted to Monteverdi’s Vespers, was screened in 2015. Harry Christophers is principal guest conductor of the Granada Symphony Orchestra and a regular guest conductor with the Academy of St. Martin in the Fields. In October 2008, Christophers was awarded an Honorary Degree of Doctor of Music from the University of Leicester. He is an Honorary Fellow of Magdalen College, Oxford, of the Royal Welsh Academy for Music and Drama, and was awarded a CBE (Commander of the Order of the British Empire) in the 2012 Queen’s Diamond Jubilee.

David Snead joined H+H as President and CEO in October 2015 after serving as Vice President of Marketing, Brand, and Customer Experience at the New York Philharmonic, a role he held since 2001. Previously, he led the marketing programs of the Pittsburgh Symphony, Guthrie Theater, Milwaukee Symphony, and Hartford Symphony. He has also served as Associate Marketing Director of the Minnesota Orchestra, General Manager of the Richmond Symphony, and Executive Director of the Eastern Connecticut Symphony. Snead is on the faculty of the League of American Orchestras’ Patron Model seminars, and is a regular lecturer at New York University and Drexel. A noted expert on the relationship between orchestras and their audiences, he has been a featured speaker at national conferences in the United States, England, France, Finland, the Netherlands, and Australia.

The Handel and Haydn Society is internationally acclaimed for its performances of Baroque and Classical music. Based in Boston, H+H’s Orchestra and Chorus delight more than 50,000 listeners each year with a 10-concert subscription series at Symphony Hall and other leading venues in addition to a robust program of intimate events in museums, schools, and community centers. Under the leadership of Artistic Director Harry Christophers, the ensemble embraces historically informed performance bringing classical music to life with the same immediacy it had the day it was written. Through the Karen S. and George D. Levy Education Program, H+H also provides engaging, accessible, and broadly inclusive music education to more than 12,000 children each year through in-school music instruction and a Vocal Arts Program that includes six youth choruses.

In addition to its subscription series, tours, and broadcast performances, H+H reaches a worldwide audience through ambitious recordings including Haydn Symphonies, the critically-acclaimed Haydn: The Creation, the best-selling Joy to the World: An American Christmas, and Handel Messiah, recorded live at Symphony Hall under Christophers’ direction.