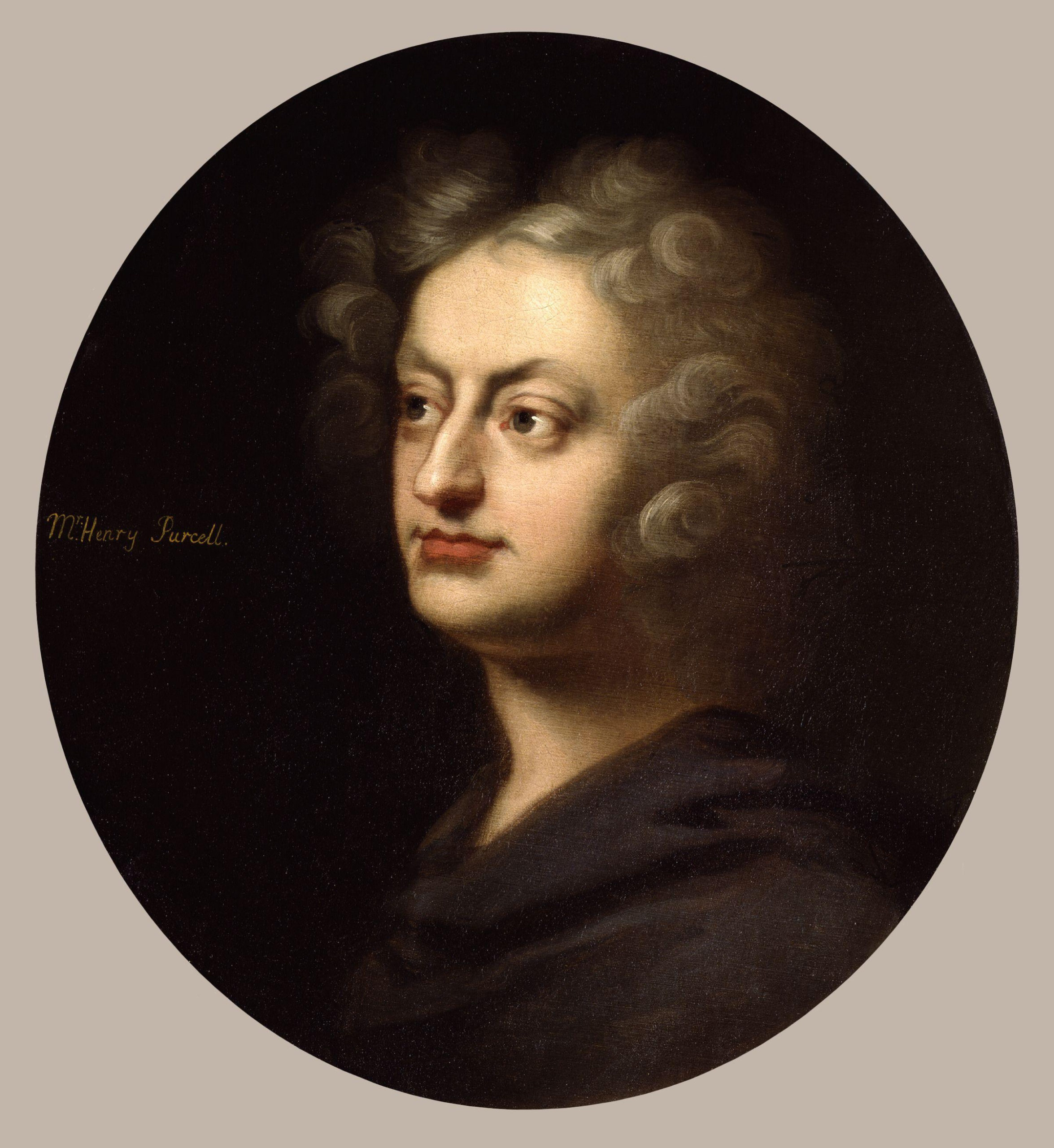 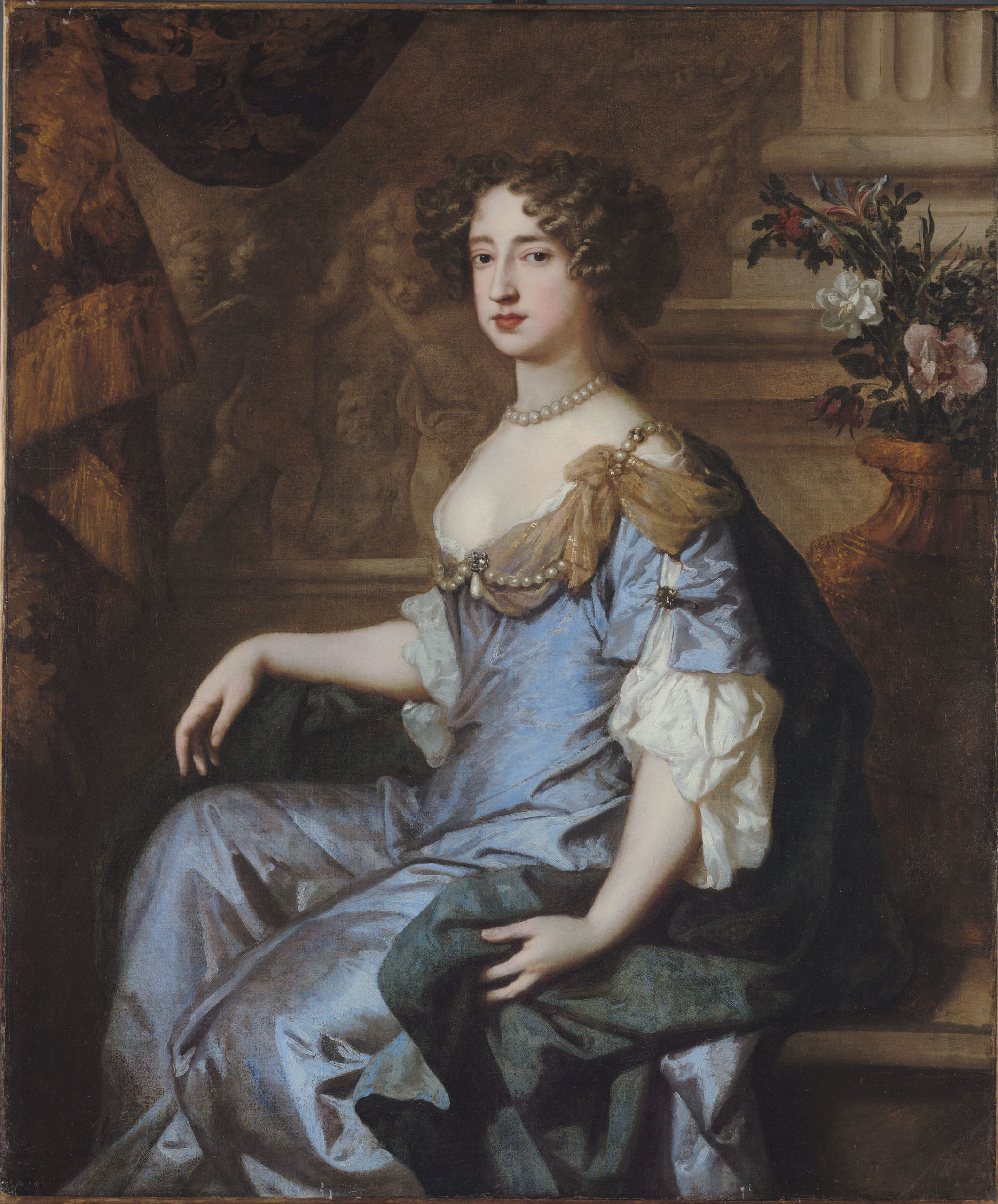 With the re-opening of theaters after the Restoration of the monarchy, English theater developed its own unique style, often called dramatic opera, in which additional scenes with music (masques) augmented spoken plays. Using Shakespeare’s play A Midsummer Night’s Dream as the backdrop, The Fairy Queen by Henry Purcell (1658/9-1695) expounds on love and marriage, with allusions to co-regnants William and Mary, even as it references London’s ever-expanding world-view.

The Fairy Queen, first performed in London in 1692, was a great success. An unknown librettist adapted Shakespeare’s play and provided the new scenarios and texts. Purcell did not set Shakespeare’s text; he provided music for the additional scenes interpolated into each act of the play. For the first performance, only the last four acts contained masques; a masque for Act 1 and two songs were added for a 1693 revival.

A Midsummer Night’s Dream is a tale of lovers, fairies, and townsmen, who all find themselves in the woods outside of Athens on the same night. The lovers, Hermia and Lysander, followed by another couple, Helena and Demetrius, are fleeing from Hermia’s father, Egeus, who demands that his daughter marry a man of his choosing. 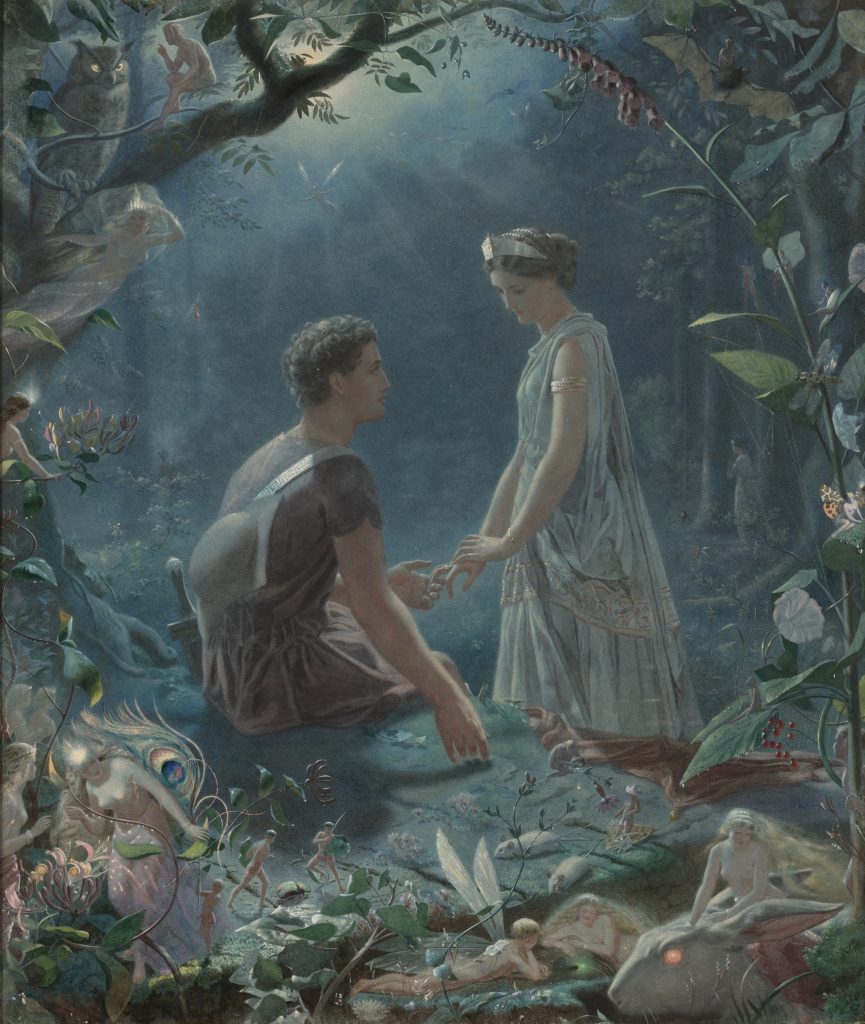 "Hermia and Lysander, A Midsummer Night's Dream" by John Simmons

Titania, the Fairy Queen, comes to the same woods to get away from her jealous husband, King Oberon. They have had an argument because she refuses to accede to his demands concerning an Indian Boy. Lastly, some townsmen decide to stage a play for an upcoming wedding and agree to practice that night in the woods. 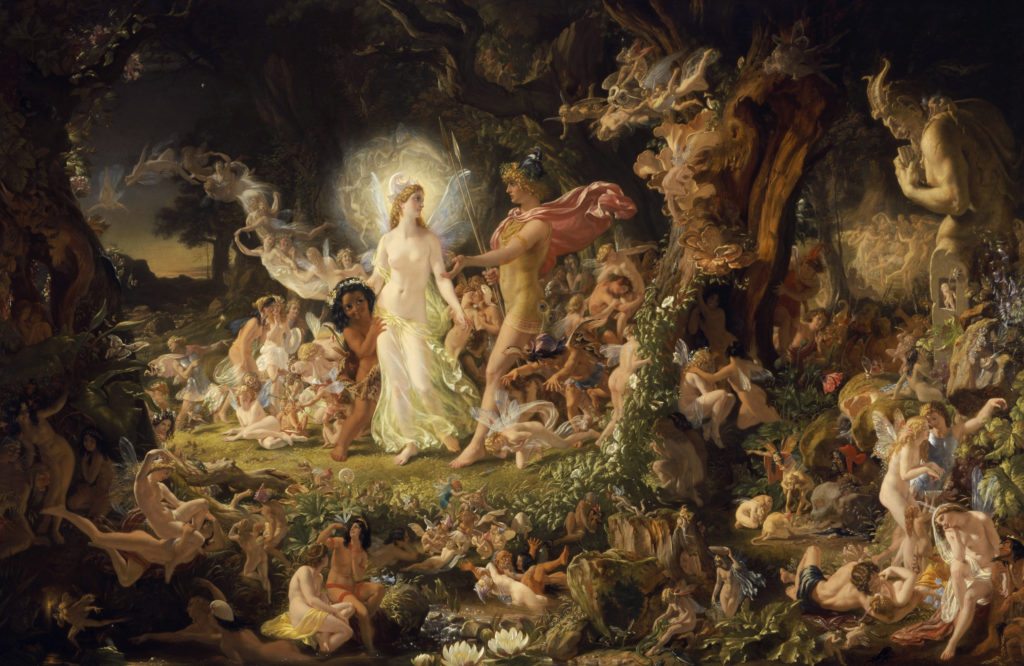 "The Quarrel of Oberon and Titania" by Sir Joseph Noel Paton

The Fairy Queen centers on Titania and the world of the fairies, but in doing so brings the situation of the human lovers into relief as well. In Act 1, humans enter the fairies’ domain beginning with the duet “Come let us leave this town,” which features a rushing bassline and close imitation between the soprano and bass.

The two worlds collide with the entrance of the Drunken Poet whose simple musical lines are embellished by the fairies, a musical representation of using the poet’s own words against him.

As the chorus helps to drive the poet away to sleep off his indulgences, Titania holds the sleeping Indian Boy. She leaves in a rage when she discovers that Oberon has sent Puck to watch them.

Titania and her fairies celebrate the night with song and dance in the masque for Act 2. After a Prelude for strings,

the invocation for tenor, “Come all ye songsters of the sky,”

is answered with bird song.

In the same way, Echo, beautifully scored for trumpet and oboe,

reflects the chorus “May the god of wit inspire.”

When Titania commands that she be sung to sleep, the airs of Night, Mystery, Secrecy, and Sleep are presented, each with a different instrumental accompaniment. In the air for Night, Purcell scores muted violins – one of the first instances of their use in England.

The languid tones of this air bring a sense of repose while Mystery’s air, accompanied only by continuo, provides a contrast in tempo and mood.

Secrecy’s “One charming night,” accompanied by recorders, is mesmerizing.

In combination with strings, Sleep’s halting “Hush, no more”

turns to a gently falling line at the word “softly.”

The staging for the masque in Act 3 contains vivid scenery, including a bridge made by two dragons through which two swans are visible. The music for this masque complements this imagery with long, rising lines in the Symphony While the Swans Come Forward

and repeated rhythmic ideas in the subsequent dances.

The Dialogue Between Coridon and Mopsa tells of a lover’s stalemate, in which Coridon wants a kiss

To conclude the evening’s celebrations, Purcell constructs tightly woven imitative passages to signify a unity of purpose in “A thousand ways we’ll find.”

The Symphony that opens the masque in Act 4 is as ornately conceived as the stage design of fountains and statues. The first of the Symphony’s three main sections features solo passages for kettledrums

and is divided into three subsections. Following a slow, central section,

After the entrance of Phoebus, who is accompanied by trumpets and drums,

the new day is marked by airs for the Four Seasons, a construction parallel to the four solos that ushered in night and sleep in Act 2. The scoring for each season is differentiated as well: Spring accompanied by violins;

Autumn by violins in a call and response with the voice;

and Winter by strings that play a chromatically descending line that is taken up by the voice as well.

With staging that references the reigning British monarchs, William (orange trees) and Mary (a Chinese garden and characters), Juno and Hymen, the goddess and god of marriage, open and close the masque for Act 5. After Juno’s entrance

and a haunting lament on lost love,

the joys of true love are extolled. Hymen proclaims that the flame of his torch, once extinguished by mistrust and deception, will burn anew.

Although the plot is complicated, Purcell’s music always sounds fresh and engaging. His imaginative score evokes an array of emotions through its attention to the English language, a sonorous clarity that belies its complexity, and economy of musical material that emphasizes both individual words and broader concepts. In other words, The Fairy Queen is enchanting.