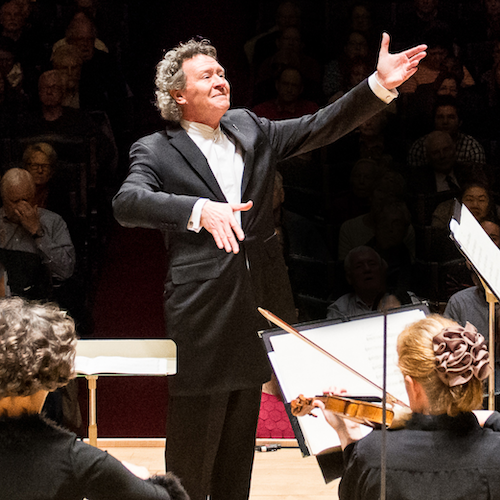 Performances Will Be Harry Christophers’s Final As Artistic Director
April 29 + May 1, 2022, at Symphony Hall in Boston

[Boston March 15, 2022] The Handel and Haydn Society will celebrate Haydn’s choral tour de force The Creation on April 29 and May 1 at Symphony Hall in Boston. The Creation is brimming with joyous, inspiring music telling the tale of the genesis of the world. These concerts will mark Harry Christophers’s final performances as Artistic Director of H+H after 13 seasons conducting America’s oldest performing arts organization.

Christophers has played a critical role in transforming H+H over the past 13 seasons. He has hired the majority of the current roster of musicians, and led H+H’s return to both New York City and Tanglewood. He led H+H through its 2015 Bicentennial, celebrating an unprecedented milestone for an American ensemble and firmly established H+H’s reputation as one of the finest Baroque and Classical ensembles in the nation.

“It will be an emotional day when we finally say goodbye to Harry,” said David Snead, President and CEO of H+H. “He has given us so much leading from the stage, but we know that Harry’s true legacy is the strong artistic foundation he built throughout the Orchestra and Chorus. Our next Artistic Director will be able to carry on the tradition of musical excellence that Harry has initiated.”

H+H has a long history with The Creation. H+H premiered the work in the United States in 1819. Christophers himself led H+H in a performance of The Creation in 2015 as part of H+H’s Bicentennial celebration. Soprano Joélle Harvey, tenor Robert Murray, and bass-baritone Matthew Brook will join the H+H Orchestra and Chorus as Haydn paints a choral masterpiece depicting creation – from light to life.

“I cannot think of a better work than Haydn’s Creation to take my final bow with H+H,” said Christophers. “It reflects the wonder at the beauty of creation and creativity itself. The latter is exactly what we constantly attempt to achieve at H+H. This magnificent Creation has to be one of my all time favourite works; it is one where our Orchestra and Chorus positively exude expression, charm, and sheer grandeur. I cannot wait.”

H+H is dedicated to following historically informed performance traditions of Baroque and Classical music, creating a sound every bit as fresh and contemporary as when the music was first written. Performing on period instruments, the H+H Orchestra brings an exhilarating sound to the original compositions.

Tickets may be purchased by calling 617.266.3605, or visiting handelandhaydn.org. Student and group discounts are also available. All individuals will be required to follow current Health + Safety Guidelines.