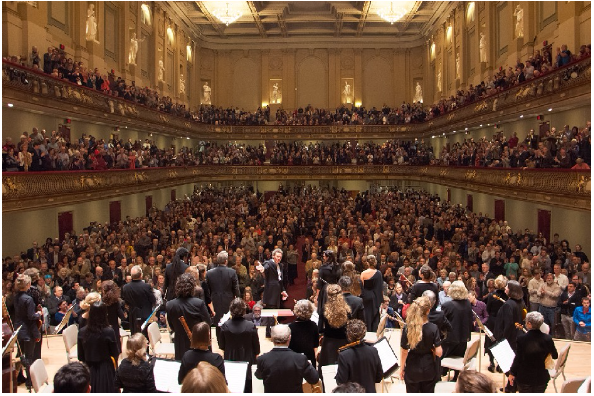 [Boston, MA – September 20, 2016] On the eve of its 202nd season — the most of any performing arts institution in the nation – the Handel and Haydn Society is embracing its third century with gusto. It has just completed an unprecedented capital campaign that more than tripled its endowment and fueled growth for initiatives from education and community concerts to international touring. Further, this week H+H also unveils a new online concert streaming series, a new recording, and a new online video series spotlighting H+H musicians and their period instruments. The results show at the box office, with new subscription sales more than double what they were last year; the 2016-2017 Season opens September 23 and 25 with Harry Christophers conducting a program featuring Bach’s Magnificat at Symphony Hall in Boston.

Instrumental Voices Campaign Raises $13.5 Million, Exceeding Goal by $1.5 Million
The Instrumental Voices capital campaign was publicly launched in 2014 with a goal of $12 million: $8.3 million for endowment and the remainder for strategic initiatives in education, artistic excellence, and audience development as well as programming to celebrate H+H’s Bicentennial. The campaign has substantially exceeded these goals, finishing at $13.52 million contributed by more than 600 donors.

The campaign expands H+H’s endowment from $3.2 million to a projected $13.5 million, an increase of over 300%.  In addition, the funds raised for the 200th birthday celebrations and strategic initiatives fueled an 80% increase for attendance for educational programs, community concerts and tours; new recording projects; and growth in organizational capacity.

“This transformative success,” shares president and CEO David Snead, “lifts H+H to a new level of artistic excellence and community service. It speaks to the health of the organization, the generosity of Boston’s donors, the leadership of the H+H board, and our relevance to the public we serve. It enables H+H to solidify its place as a leading cultural institution.”

“We are humbled,” says W. Carl Kester, Chairman of H+H’s Board of Governors, “by this incredible, broad support, and what it says about H+H’s value to the community. It’s wonderful to know that live performances of the masterworks from the Baroque and Classical eras still elicit excitement in modern audiences.”

H+H Launches Webcasts of Concert Performances
Concurrent with the launch of its new season, H+H introduces a new, free online concert series on its website, www.handelandhaydn.org. The service will webcast highlights from recent live performances, with new performances launched throughout the season.

The inaugural webcast is last season’s opening performance of Mozart’s Requiem, conducted by Harry Christophers with soloists Lauren Snouffer, Hannah Pedley, Robert Murray, and Dashon Burton. Of that performance The Boston Globe raved:  “one could hardly imagine a more original ‘Requiem,’ or a better one.” The Requiem webcast will be available for 45 days beginning September 19.

“We are indebted to the H+H musicians for making it possible to launch this new service with Mozart’s Requiem at no charge,” said David Snead. We hope these webcasts introduce the brilliance of our artists to new audiences around the world.” Future webcasts will be announced shortly.

New H+H CD Released
Also in September, H+H released its newest recording entitled The Old Colony Collection, conducted by Harry Christophers and featuring the H+H Chorus. This follows H+H’s 2015 release of Haydn’s The Creation, which was named one of the top-ten recordings of the year by The Chicago Tribune.

“The Old Colony Collection was a compendium of choral works published by the Handel and Haydn Society in the 1820s –1840s,” explains Snead. “The collection is one of the earliest examples of H+H’s commitment to education and introducing classical music to new audiences and became wildly successful beyond anyone’s expectations. It went through 22 editions and became a standard in churches throughout the country. It became a key contributor to H+H’s financial survival in those early days, and this new CD is an homage to that important chapter of our history. The music is also a great deal of fun to listen to.”

“With this recording we have returned to our grass roots – choral music,” says Artistic Director Harry Christophers. “There is some absolutely beautiful writing in these forgotten gems, such as the verse anthems by James Kent, Thomas Linley, and Samuel Chapple. I do hope with this recording we bring their music to life again.”

The recording is made possible through support from Peter Manson and Peter Durfee, and from the Peacewoods Charitable Fund. CDs may be purchased at H+H concerts and online at www.handelandhaydn.org.

“Stories of the Instruments” Videos Released
The Handel and Haydn Society is a period instrument ensemble, with its musicians employing historically informed performance practices and performing on instruments either directly from the Baroque and Classical eras, or copied from such instruments.

To help explain this importance of this approach, H+H will release a series of short videos of musicians from its orchestra describing their approach to music and introducing their instruments, many of which date from the time of Handel and Haydn themselves.

In the inaugural releases, principal cellist Guy Fishman talks about his cello which was built in Rome in 1704. Concertmaster Aisslinn Nosky introduces her 1746 Spanish violin, and principal bassist Rob Nairn shows his double bass, which is an exact replica of a specific instrument used in Haydn’s orchestra in the 1770s. Nairn’s bass has the unusual feature of a detachable neck, which aids in transportation. “Back then, it wasn’t that easy to transport a bass via stagecoach,” Nairn says. Nairn also discusses the musical similarities between his 1980s Australian rock band, Mood Section, and performing with H+H.

In future videos, cellist Sarah Freiberg will show off her 1784 cello, built by the inventor of the roller skate. And, violinist Susanna Ogata will discuss her Baroque violin bow, which she says is “like a paintbrush to the music.”

“H+H’s approach to Baroque and Classical performance is to do all we can to bring the listener as close as possible to the composer, and to the day when the music was brand new,” explains Snead. “We aren’t using period instruments out of intellectual curiosity; rather it’s all about making the music fresh, immediate and contemporary.”

The videos are available at www.handelandhaydn.org and on YouTube.

About Harry Christophers, Conductor and Artistic Director
The 2016-2017 Season marks Harry Christophers’ eighth as Artistic Director of the Handel and Haydn Society. Since his appointment in 2009, Christophers and H+H have embarked on an ambitious artistic journey toward the organization’s 200th anniversary with a showcase of works premiered in the US by H+H since 1815, broad education programming, community outreach activities and partnerships, and the release of a series of recordings on the CORO label. Christophers is known internationally as founder and conductor of the UK-based choir and period-instrument ensemble The Sixteen. He has directed The Sixteen throughout Europe, America, Australia, and the Far East, gaining a distinguished reputation for his work in Renaissance, Baroque, and 20th- and 21st-century music. In 2000, he instituted The Choral Pilgrimage, a tour of British cathedrals from York to Canterbury. He has recorded over 120 titles for which he has won numerous awards, including the coveted Gramophone Award for Early Music and the prestigious Classical Brit Award in 2005 for his disc Renaissance. His CD IKON was nominated for a 2007 Grammy and his second recording of Handel’s Messiah on The Sixteen’s own label CORO won the prestigious MIDEM Classical Award 2009. In 2009, he received one of classical music’s highest accolades, the Classic FM Gramophone Awards Artist of the Year Award, and The Sixteen won the Baroque Vocal Award for Handel Coronation Anthems, a CD that also received a 2010 Grammy Award nomination as did Palestrina, Vol. 3 in 2014. From 2007 he has featured with The Sixteen in the highly successful BBC television series Sacred Music, presented by actor Simon Russell Beale. The latest hour-long program, devoted to Monteverdi’s Vespers, will be screened in 2015. Harry Christophers is principal guest conductor of the Granada Symphony Orchestra and a regular guest conductor with the Academy of St. Martin in the Fields. In October 2008, Christophers was awarded an Honorary Degree of Doctor of Music from the University of Leicester. He is an Honorary Fellow of Magdalen College, Oxford and also of the Royal Welsh Academy for Music and Drama and was awarded a CBE (Commander of the Order of the British Empire) in the 2012 Queen’s Birthday Honors.

About the H+H Period Instrument Orchestra and Chorus
http://handelandhaydn.org/about/period-instrument-orchestra-and-chorus/

About David Snead, President and CEO
David Snead joined H+H as President and CEO in October 2015 after serving as Vice President of Marketing, Brand and Customer Experience at the New York Philharmonic a role he held since 2001. Previously, he led the marketing programs of the Pittsburgh Symphony, Guthrie Theater, Milwaukee Symphony, and Hartford Symphony. He has also served as Associate Marketing Director of the Minnesota Orchestra, General Manager of the Richmond Symphony, and Executive Director of the Eastern Connecticut Symphony. Snead is on the faculty of the League of American Orchestras’ Patron Model seminars and Roosevelt University’s graduate program in arts management, and is a regular lecturer at New York University and Drexel. A noted expert on the relationship between orchestras and their audiences, he has been a featured speaker at national conferences in the United States, England, France, Finland, the Netherlands, and Australia.

About the Handel and Haydn Society
The Handel and Haydn Society is internationally acclaimed for its performances of Baroque and Classical music. Based in Boston, H+H’s Period Instrument Orchestra and Chorus delight more than 50,000 listeners each year with a nine concert subscription series at Symphony Hall and other leading venues in addition to a robust program of intimate events in museums, schools, and community centers. Under the leadership of Artistic Director Harry Christophers, the ensemble embraces historically informed performance bringing classical music to life with the same immediacy it had the day it was written. Through the Karen S. and George D. Levy Education Program, H+H also provides engaging, accessible, and broadly inclusive music education to over 10,000 children each year through in-school music instruction and a Vocal Arts Program that includes six youth choruses.

Founded in Boston in 1815, H+H is the oldest continuously-performing arts organization in the United States, and is unique among American ensembles for its longevity, capacity for reinvention, and distinguished history of premieres. H+H began as a choral society founded by middle-class Bostonians who aspired to improve the quality of singing in their growing American city. They named the organization after two composers—Handel and Haydn—to represent both the old music of the 18th century and what was then the new music of the 19th century. In the first decades of its existence, H+H gave the American premieres of Handel’s Messiah (1818), Haydn’s The Creation (1819), Verdi’s Requiem (1878), and Bach’s St. Matthew Passion (1879). Between 2014 and 2016, H+H celebrated its Bicentennial with two seasons of special concerts and initiatives to mark 200 years of music making. Since its founding, H+H has given more than 2,000 performances before a total audience exceeding 2.8 million.

In addition to its subscription series, tours, and broadcast performances, H+H reaches a worldwide audience through ambitious recordings including the critically-acclaimed Haydn The Creation, the best-selling Joy to the World: An American Christmas, and Handel Messiah, recorded live at Symphony Hall under Christophers’ direction. http://handelandhaydn.org/