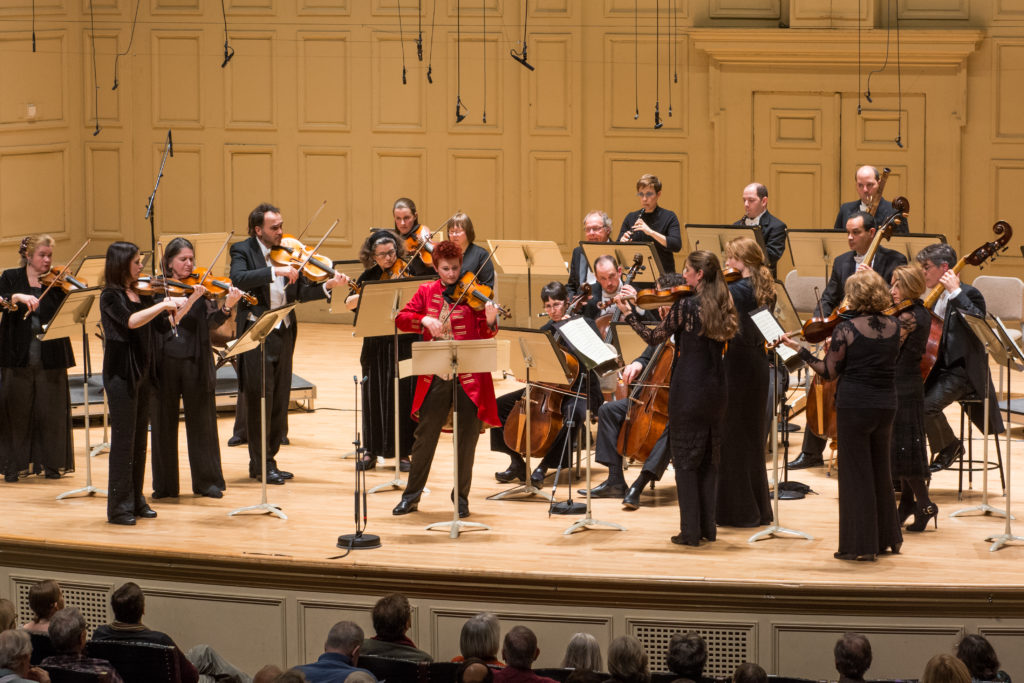 [Boston, MA – September 22, 2017] The Handel and Haydn Society continues its 2017–18 Season with a program of Mozart + Beethoven, led by H+H Concertmaster Aisslinn Nosky, her debut leading H+H at Symphony Hall. The program includes Mozart’s beloved Symphony No. 40, Beethoven’s Triple Concerto, and H+H’s first ever performance of the remarkable Afro-French 18th century composer Chevalier de Saint-Georges’ Overture to L’Amant Anonyme. The Concert features soloists Aisslinn Nosky on violin, Guy Fishman on cello, and Ian Watson on fortepiano. Performances will take place on Friday, October 27 (7:30pm) and Sunday, October 29 (3pm) at Symphony Hall located at 301 Massachusetts Avenue in Boston. Tickets range from $24-$96 and may be purchased by calling 617-266-3605, visiting handelandhaydn.org, or in person at 9 Harcourt Street in Boston (M-F 10am-6pm). Student and group discounts are available. Further, subscription packages to H+H’s 2017–18 Season are available.

“We’re proud to have Aisslinn lead what is sure to be a sublime, joyous, and dramatic concert, her first time directing H+H at the historic Symphony Hall,” shares H+H President and CEO David Snead. “We’re also looking forward to H+H’s first performance ever by the remarkable Afro-French 18th century composer Chevalier de Saint-Georges, best remembered as one of the first classical composers of African ancestry. Audiences will also be treated to H+H principals Guy Fishman and Ian Watson, who masterfully perform and passionately share the masters’ greats, on the period instruments for which they were composed.”

About Aisslinn Nosky, Director and Violin

Ms. Nosky was appointed Concertmaster of the Handel and Haydn Society in 2011. With a reputation for being one of the most dynamic and versatile violinists of her generation, Nosky is in great demand internationally as a soloist, leader, and concertmaster. Recent collaborations include the Thunder Bay Symphony, the Lameque International Baroque Festival Orchestra, Arion Baroque Orchestra, the Calgary Philharmonic, Collegium Musicum Hanyang, and Tafelmusik Baroque Orchestra. Nosky is also a member of I FURIOSI Baroque Ensemble. For over a decade, this innovative Canadian ensemble has presented its own edgy and inventive concert series in Toronto and toured Europe and North America, while drawing new audiences in to Baroque music. With the Eybler Quartet, Nosky explores repertoire from the first century of the string quartet literature on period instruments. The Eybler Quartet’s latest recording of Haydn’s Opus 33 string quartets was released to critical acclaim in 2012. Since 2005, Nosky has been a highly active member of Tafelmusik Baroque Orchestra and has toured and appeared as soloist with this internationally renowned ensemble.

Click here to view Aisslinn Nosky talking about her relationship with her baroque violin:
https://youtu.be/D95uMNycZuQ

Guy Fishman is principal cellist of the Handel and Haydn Society, and is heard as a soloist, recitalist, chamber, and orchestral musician on period and standard cello. Guy has played with Dawn Upshaw, Gilbert Kalish, Eliot Fisk, Daniel Stepner, Lara St. John, Vadim Gluzman, Richard Egarr, Kim Kashkashian, Mark Peskanov, and Natalie Merchant in recital, and appears at prestigious summer festivals as well as with orchestras such as the Albany Symphony and the Orchestra of St. Luke’s. His teachers include David Soyer, Peter Wiley, Julia Lichten, and Laurence Lesser of the New England Conservatory, where he earned a Doctorate and also serves on the faculty. In addition, he is a Fulbright Fellow, mentoring with famed Dutch cellist Anner Bylsma in Amsterdam. His recordings appear on Olde Focus, Centaur, CORO, Telarc, Titanic, and Newport Classics labels. Guy plays a rare cello made in Rome in 1704 by David Tecchler.

Click here to view Guy Fishman talking about his relationship with his period cello:
https://youtu.be/GuQBD2zJEWs

Multi-talented Ian Watson has been described by The Times in London as a “world-class soloist,” a performer of “virtuosic panache” and by the Frankfurter Allgemeine Zeitung as “a conductor of formidable ability.” He is Artistic Director of Arcadia Players Period-Instrument Orchestra, Music Director of the Connecticut Early Music Festival, and Associate Conductor of the Handel and Haydn Society. Ian won a scholarship at age 14 to the Junior School of the Royal Academy of Music in London, later winning all the prizes for organ performance. He completed his studies with Flor Peeters in Belgium. Ian has appeared with most major UK orchestras and the Polish and Stuttgart Chamber Orchestras, Bremen Philharmonic, Rhein-Main Symphony, Colorado Symphony, Komische Oper Berlin, and Darmstadt State Opera among numerous others. He is featured on many film soundtracks including Amadeus, Polanski’s Death and the Maiden, Restoration, Cry the Beloved Country, Voices from A Locked Room, and the BBC‘s production of David Copperfield.

The 2017–18 Season marks Harry Christophers’ ninth as Artistic Director of the Handel and Haydn Society. Since his appointment in 2009, Christophers and H+H have embarked on an ambitious artistic journey toward the organization’s 200th anniversary with a showcase of works premiered in the US by H+H since 1815, broad education programming, community outreach activities and partnerships, and the release of a series of recordings on the CORO label. Christophers is known internationally as founder and conductor of the UK-based choir and period-instrument ensemble The Sixteen. He has directed The Sixteen throughout Europe, America, Australia, and the Far East, gaining a distinguished reputation for his work in Renaissance, Baroque, and 20th- and 21st-century music. In 2000, he instituted The Choral Pilgrimage, a tour of British cathedrals from York to Canterbury. He has recorded over 120 titles for which he has won numerous awards, including the coveted Gramophone Award for Early Music and the prestigious Classical Brit Award in 2005 for his disc Renaissance. His CD IKON was nominated for a 2007 Grammy and his second recording of Handel’s Messiah on The Sixteen’s own label CORO won the prestigious MIDEM Classical Award 2009. In 2009, he received one of classical music’s highest accolades, the Classic FM Gramophone Awards Artist of the Year Award, and The Sixteen won the Baroque Vocal Award for Handel Coronation Anthems, a recording that also received a 2010 Grammy Award nomination as did Palestrina, Vol. 3 in 2014. From 2007, he has featured with The Sixteen in the highly successful BBC television series Sacred Music, presented by actor Simon Russell Beale. The hour-long program, devoted to Monteverdi’s Vespers, was screened in 2015. Harry Christophers is principal guest conductor of the Granada Symphony Orchestra and a regular guest conductor with the Academy of St. Martin in the Fields. In October 2008, Christophers was awarded an Honorary Degree of Doctor of Music from the University of Leicester. He is an Honorary Fellow of Magdalen College, Oxford, of the Royal Welsh Academy for Music and Drama, and was awarded a CBE (Commander of the Order of the British Empire) in the 2012 Queen’s Diamond Jubilee.

David Snead joined H+H as President and CEO in October 2015 after serving as Vice President of Marketing, Brand, and Customer Experience at the New York Philharmonic, a role he held since 2001. Previously, he led the marketing programs of the Pittsburgh Symphony, Guthrie Theater, Milwaukee Symphony, and Hartford Symphony. He has also served as Associate Marketing Director of the Minnesota Orchestra, General Manager of the Richmond Symphony, and Executive Director of the Eastern Connecticut Symphony. Snead is on the faculty of the League of American Orchestras’ Patron Model seminars, and is a regular lecturer at New York University and Drexel. A noted expert on the relationship between orchestras and their audiences, he has been a featured speaker at national conferences in the United States, England, France, Finland, the Netherlands, and Australia.

The Handel and Haydn Society is internationally acclaimed for its performances of Baroque and Classical music. Based in Boston, H+H’s Orchestra and Chorus delight more than 50,000 listeners each year with a 10-concert subscription series at Symphony Hall and other leading venues in addition to a robust program of intimate events in museums, schools, and community centers. Under the leadership of Artistic Director Harry Christophers, the ensemble embraces historically informed performance bringing classical music to life with the same immediacy it had the day it was written. Through the Karen S. and George D. Levy Education Program, H+H also provides engaging, accessible, and broadly inclusive music education to more than 12,000 children each year through in-school music instruction and a Vocal Arts Program that includes six youth choruses.

In addition to its subscription series, tours, and broadcast performances, H+H reaches a worldwide audience through ambitious recordings including Haydn Symphonies, the critically-acclaimed Haydn: The Creation, the best-selling Joy to the World: An American Christmas, and Handel Messiah, recorded live at Symphony Hall under Christophers’ direction.