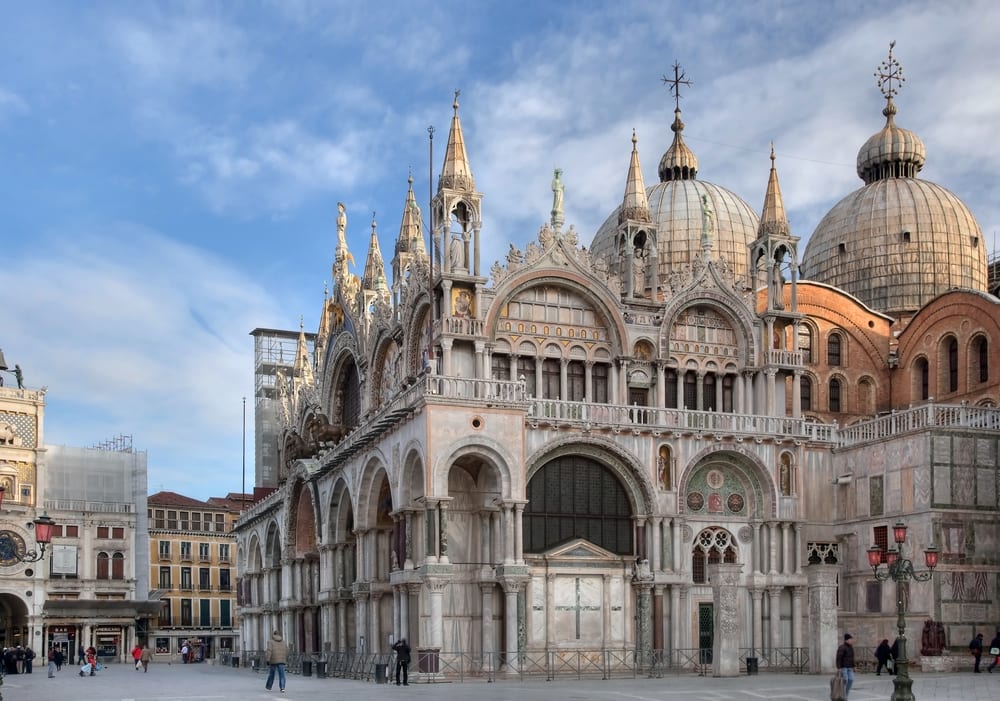 Vespro della Beata Vergine by Claudio Monteverdi (1567-1643) was first published in Venice in 1610. The complete publication consists of a setting of the Mass for six voices, music for the evening prayer service, Vespers, motets, and a sonata. In choosing texts associated with the Blessed Virgin Mary, including the Magnificat, which concluded the Vespers service, Monteverdi created a comprehensive work from which individual pieces could be used for Marian celebrations throughout the church year. But simply describing the Vespers as service music belies the profound impact of Monteverdi’s music.

When he published the Vespers, Monteverdi was working in Mantua, where he composed mostly secular music for the Gonzaga court. Although it is unclear how much sacred music Monteverdi composed at this time, we do know that he applied for a church position in Mantua in 1608. When that position went to another musician, Monteverdi probably began looking elsewhere.

Monteverdi dedicated the publication to Pope Paul V and traveled to Rome to present a copy to him, perhaps with the hope of being offered a position in that city. No position was offered to him, but three years later, the position of maestro di cappella (music director) at St. Mark’s Basilica in Venice became vacant. While there is no record of any direct connection between Monteverdi’s Vespers and this position, some scholars have suggested that he submitted this piece as an example of his church music. In any case, Monteverdi was hired and spent the rest of his life in Venice.

In the 16th century Venice was a political, economic, and cultural force. Although its political and economic power waned in the succeeding centuries, Venice’s musical influence remained strong into the 17th century and beyond. St. Mark’s Basilica was the center of musical activities in Venice; when Monteverdi was appointed maestro di cappella, it boasted three organists, plus choral and instrumental ensembles.

Like St. Mark’s, many large churches and princely chapels employed both singers and instrumentalists; however, Monteverdi designed the Vespers to be adaptable to a variety of performance options. He explicitly wrote that for movements such as “Dixit Dominus” the instrumental ritornellos can be omitted. He also included two settings of the Magnificat, one for six voices plus organ and another for seven voices plus other instruments. A versatile and practical publication, part of the genius of the Vespers lies in the fact that the work is equally powerful when performed by voices plus organ or with a variety of other instrumental combinations.

At the turn of the 17th century some of Monteverdi’s secular vocal music was publically criticized for breaking accepted compositional rules. Monteverdi, with the assistance of his brother, explained in a later publication that he was composing music that responded to the text. Monteverdi said the “text was the mistress to the music” and as such the music needed to express and reflect the emotions of that text. Monteverdi called this the “second practice” of composition, which complemented the “first practice,” essentially a more traditional approach.

Monteverdi’s Vespers reflect his all-encompassing compositional viewpoint. The Vespers service features Psalms and other prayers, most of which change depending on the feast celebrated. There are a total of five Psalms specific to Marian feasts. Monteverdi set each of these, in addition to the opening response and the hymn “Ave maris stella,” using cantus firmus technique. In other words, each setting is built on a plainchant melody. Monteverdi set additional texts—all but one associated with Mary and none specified in the Vespers service—as solo movements. By incorporating chant into the choral movements and using virtuoso techniques derived from his secular compositions—including opera—in the solo movements, Monteverdi embraces the musical past and molds his personal style onto it.

Alternating patterns provide contrast and continuity in the Vespers, beginning with the opening movement. “Deus in adiutorium meum intende” begins with a phrase of plainchant, an intonation. The chorus then responds, singing in a chant-like fashion, accompanied by an instrumental fanfare on a single chord. This fanfare, the same that opened Monteverdi’s opera L’Orfeo, then alternates with a dance-like instrumental passage.

In addition to using cantus firmus technique, a musical tradition dating from the Renaissance, Monteverdi explores a multiplicity of textures in each of the choral movements, from the imitative lines of “Dixit Dominus” to the two five-part choruses of “Nisi Dominus.” Here, the second lowest voice in each chorus sings the cantus firmus while the remaining voices alternate brilliant and uplifting passages.

In “Laudate pueri” a rising run in two of the inner voice parts at “Excelsus super omnes gentes Dominus” (The Lord is high above all nations) leads to the topmost voice singing this text while two lower voices sing a florid passage on “et super caelos gloria eius” (his glory above the heavens).

Grouping two lower voices with one high voice continues as the text now shifts to a series of questions, answered by a joyful, eight-part chorus.

“Laetatus sum,” for six voices, is distinguished by two styles of writing. One is a denser counterpoint with imitation that gradually expands over a walking bass line

and the second is filled with florid passagework sung over a static (one chord) bass.

“Lauda Ierusalem” is for seven voice parts with the tenors singing the cantus firmus. Initially, Monteverdi offsets the tenor part from the rest of the ensemble so that this melody attracts our attention,

but gradually the tenor part is subsumed into the overall texture at “Non fecit taliter omni nationi” (He has not done so with any other nation). Once engrained into the texture, Monteverdi then moves the chant to the highest vocal part for the Doxology.

With the solo movements, Monteverdi depicts not only the literal meaning of each word, but also the poetic and emotional meaning of the whole text. Although the sensuous Old Testament texts from the Song of Songs, “Nigra sum” and “Pulchra es,” have their origins in ancient love poetry, by Monteverdi’s day they are associated with Mary. The sparse opening of “Nigra sum,” a text written from the female perspective but scored for tenor, stands in contrast to the two preceding choruses and creates an immediate sense of intimacy.

Later, a long, rising line in the voice and accompaniment depicts “surge” (arise); the bass line then mirrors this in the closing measures.

In the duet “Pulchra es” the voices sing a rhythmically distinctive line on the word “avolare” (overwhelm). Monteverdi has already used a similar idea earlier in the duet, first on the word “pulchra” (beautiful), then on “decora” (lovely),

and also on “ordinata” (formation). These opera-inspired flourishes highlight the individual words but also connect the whole musically.

“Duo Seraphim,” the only text not associated with Mary, begins with two narrators. As soon as the role of narrator is complete, the voices become the Seraphim proclaiming “Sanctus, sanctus, sanctus Dominus Deus Sabaoth” (Holy, holy, holy Lord of Hosts) using virtuosic vocal techniques: florid passages, but also repeated notes sung both individually and together.

As the text continues “Tres sunt qui testimonium dant in coelo” (There are three who bear witness in heaven), a third voice is added and again the voices flow between the contrapuntal control of church music and the virtuosity of opera. Another wonderful moment occurs at “et hi tres unum sunt” (and they are three in one) as Monteverdi brings all three voice parts to a single pitch on “unum sunt” before launching once more into a final virtuoso section on “plena est omnis terra gloria eius” (the whole earth is full of his glory).

Monteverdi transforms specific words through an echo technique in “Audi coelum.” After the soloist asks heaven to hear “my words … suffused with joy” (perfuse gaudio), the echo replies “Audio” (I hear).

The exchange continues, culminating in Mary being proclaimed mediator between heaven and earth. In a final bit of clever text painting, on the word “omnes” (all) Monteverdi adds five more voice parts.

In his setting of the hymn “Ave maris stella,” Monteverdi varies the texture of the eight-part chorus through the addition and subtraction of voices. Ritornellos, featuring different instrumental combinations, refresh the ear and provide a palette that complements the voices in variety and continuity.

In the “Sonata sopra Sancta Maria,” imitative sections for the full ensemble lead to pairs of instruments accompanied by basso continuo. As this continues, the addition of the voice singing “Sancta Maria, ora pro nobis” (Holy Mary, pray for us) elevates what would have been a simple prayer to a unique expression of unmatched beauty.

The inclusion of this sonata and other movements such as “Ave maris stella” keeps the collection suitable for any celebration surrounding the Virgin Mary. It looks beyond the marking of a single church feast or the limitations of any one ensemble and represents something broader in function and universal in meaning.

Each line of the Magnificat for seven voices is treated differently and with stunning virtuosity. Monteverdi continually builds and varies the texture, until the whole blossoms with the full ensemble at “Sicut erat in principio” (As it was in the beginning)

before closing with cascading figures on the word “Amen.” Monteverdi’s Vespers is a work that remains with the listener long after the performance has finished. Monteverdi’s mix of modern and traditional, voice and instruments, choral and solo, sustained sound and virtuosic activity, reaches beyond the expression of either text or music alone. It is a work that transcends.