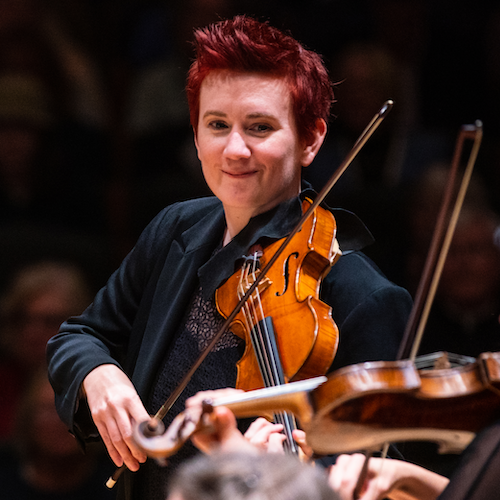 [Boston, MA – August 31, 2021] The Handel and Haydn Society will open its 2021-22 season with one of classical music’s most spectacular masterpieces, Vivaldi’s The Four Seasons on Friday, October 8 and Sunday, October 10 at Symphony Hall in Boston. The performance will be led by Concertmaster Aisslinn Nosky, performing on violin alongside the H+H orchestra.

Famed for its use in countless movies, television shows and commercials, and video games, Vivaldi’s The Four Seasons gives musical expression to each season of the year. Published in 1725, The Four Seasons stands as one of the earliest examples of music with a narrative element, evoking the sounds of nature. One of the most innovative pieces in classical music, Vivaldi spent years perfecting The Four Seasons, translating the poems he had written into beautiful music. Audience members can close their eyes and escape to a picturesque Northern Italy and follow along as shepherds tend to their flock, hunters stalk their prey, and villagers celebrate the fall harvest.

“The Four Seasons is a joy to play because of Vivaldi’s brilliance,” said Aisslinn Nosky, concertmaster. “You can hear the wind blowing and the thunder crashing and for a moment you get to see the world through the lens of a true virtuoso who experienced everything around him through music.”

The evening will begin with a joyous curtain-raiser, selections from Handel’s effervescent Water Music, a suite of short pieces known for its high-spirited movements

which first premiered in 1717. Performed by the H+H Orchestra, it will be a moment to celebrate live performance and a community gathering once again.

“The wait is over – H+H is excited to welcome audiences back to live performances. What better way to start the season than with Vivaldi’s The Four Seasons, one of the most sensorial pieces of Baroque music. It enables even casual fans of classical music to experience the sounds and feelings of each of the seasons,” said Handel and Haydn Society President and CEO David Snead. “One of the most dynamic and versatile violinists of her generation, Concertmaster Aisslinn Nosky will bring a dazzling virtuosity to this performance, our first subscription concert since the lights went dark in March 2020. It will be a celebration not to be missed.”

The evening will continue with the live concert premiere of acclaimed bass-baritone and composer Jonathan Woody’s Suite for String Orchestra after the works of Charles Ignatius Sancho. Sancho was born on a ship carrying enslaved people in the Atlantic, sold into slavery, escaped to England to become a business owner, writer, composer, and the first Black man to vote in a British election.

Handel and Haydn’s 2021-22 Season Performances include:

Haydn The Creation – April 29 + May 1 at Symphony Hall