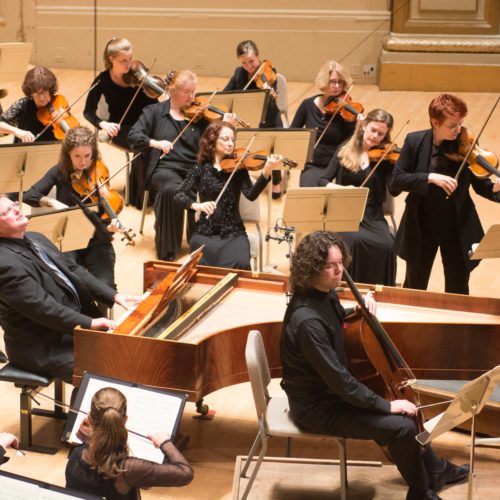 [Boston, MA – January 16, 2018] Could there be a more perfect collection than the six concertos known as the Brandenburgs? The Handel and Haydn Society continues its 2017-18 Season with a program of the Bach Brandenburg Concertos Nos. 1-6 on Friday, February 16, 2018 at 7:30 p.m. at Sanders Theatre in Cambridge, MA followed by performances on Saturday, February 17 at 7:30 p.m. and Sunday, February 18, 2018 at 3:00 p.m., both at Jordan Hall in Boston. Saturday’s performance was added to the schedule due to strong popular for the Friday and Sunday performances.

Widely regarded as premier examples of Baroque orchestral music, the Brandenburg Concertos were composed by Johann Sebastian Bach between 1708 and 1721, commissioned for Christian Ludwig, Margrave of Brandenburg. Co-directors Aisslinn Nosky and Ian Watson will lead the Handel and Haydn Orchestra through all six concertos in an emotional and technically exemplary performance.

“Aisslinn and Ian will bring Bach’s vision to life, creating an unparalleled union between the composer, the musicians, and the audience with this performance of the complete Brandenburg Concertos,” said H+H President and CEO David Snead. “This performance is as close as possible to Bach’s original intention, interpreted through historically informed techniques and performed on the instruments from the composer’s period. It promises to be an exceptional evening.”

Tickets for the performances are on sale now. Tickets range from $25 – $102 and may be purchased by calling 617-266-3605, visiting handelandhaydn.org or in person at 9 Harcourt Street in Boston (M-F 10 AM – 6 PM). Student and group discounts are also available.

About the Handel and Haydn Society
Founded in Boston in 1815, H+H is the oldest continuously-performing arts organization in the United States, and is unique among American ensembles for its longevity, capacity for reinvention, and distinguished history of premieres. Internationally acclaimed for its performances of Baroque and Classical music. H+H’s Orchestra and Chorus delight more than 50,000 listeners each year with a 10-concert subscription series at Symphony Hall and other leading venues, in addition to a robust program of intimate events in museums, schools, and community centers. Under the leadership of Artistic Director Harry Christophers, the ensemble embraces historically informed performance bringing classical music to life with the same immediacy it had the day it was written. Through the Karen S. and George D. Levy Education Program, H+H also provides engaging, accessible, and broadly inclusive music education to more than 11,500 children each year through in-school music instruction and a Vocal Arts Program that includes six youth choruses.

In addition to its subscription series, tours, and broadcast performances, H+H reaches a worldwide audience through ambitious recordings including Haydn (Vol. 1-3), the critically-acclaimed Haydn: The Creation, the best-selling Joy to the World: An American Christmas, and Handel Messiah, recorded live at Symphony Hall under Christophers’ direction.